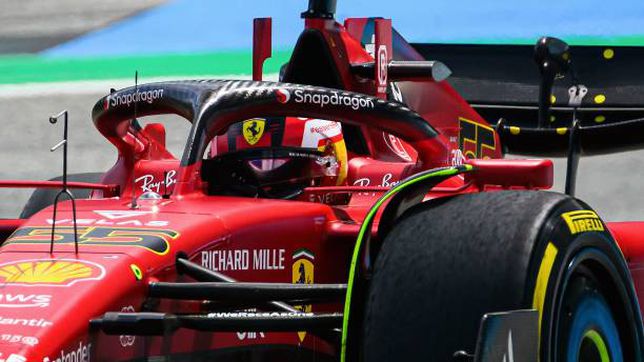 It is only necessary to change the tuxedo for a red jumpsuit and the weapon, for a single-seater. And from there, all possibilities open up for Ca

It is only necessary to change the tuxedo for a red jumpsuit and the weapon, for a single-seater. And from there, all possibilities open up for Carlos Sainz. The man from Madrid is living his best stage in Formula 1 despite not having found his maximum potential together with the Ferrari that they have developed in Maranello according to the guidelines of the new regulations, but not even that detail has prevented him from entering history. of the Great Circus as the winner of a Grand Prix. With his victory at Silverstone, the man from Madrid has already visited all the steps of the podium in the World Championship and now, the next step is to continue enlarging his record with a crown… which does not rule out storming this season.

“I understand those who say that because it has not been the easiest start to the season,” Carlos himself assumes on Sky Sports about whether he is the right driver to fight for the title, but it is simply an understanding that he has not internalized. towards your aspirations. The Madrid native, fourth overall, is capable of anything despite the 75 points that separate him from the leader Verstappen and, of course, he does not give up being the best Maranello driver for the second year in a row, knowing the 33 points he has Leclerc in his favor. Sainz hit rock bottom in Barcelona, ​​but all the problems that have accumulated until then have resulted in an even stronger driver waiting for the best version of him.

There is license to dream. To the “good job in the last few weekends”, we must add all the reliability contingencies that are dotting all the teams and, of course, some background information that Carlos reveals: “If we look at my performance in the last four or five seasons, I have always worked more in the second part. So, we have to wait and see what happens.” With the results in hand, it is only necessary to go back to 2021 where he added three of his four podiums with Ferrari in the final stretch of the course, just as it happened in 2020 where he made his debut in the drawer with McLaren.

The Madrid native’s optimism stems from results that back him up, although he continues to remain cautious as “it’s still too early to predict anything.” Despite all the progress he has experienced during the eleven grand prix that have been held to date, Sainz maintains the same argument as after his “worst moment” of the course in Montmeló, although he acknowledges that it was not in the home race when he lived the turning point: “It was in Monaco, because there we already fought for pole position. Also in Baku we fought for that position and then in Canada for the victory”.

The next step took place in Great Britain with that long-awaited first victory in the World Cup, but with eleven visits pending on the calendar (Paul Ricard’s is the next on the list to make way for the second half of the course) and 275 points in game, Carlos is convinced that his top is yet to come: “I’ve been slowly getting on a roll, but I wouldn’t say I’m one hundred percent yet. I think there are still things to improve, even in the Silverstone race. But I feel much more comfortable and that ceiling can come soon, at any time.

Loading...
Newer Post
NBA: Nowitzki’s ordeal after retiring from the NBA: “I have almost no mobility”
Older Post
All tickets sold for the 2022 UEFA Super Cup | UEFA Super Cup