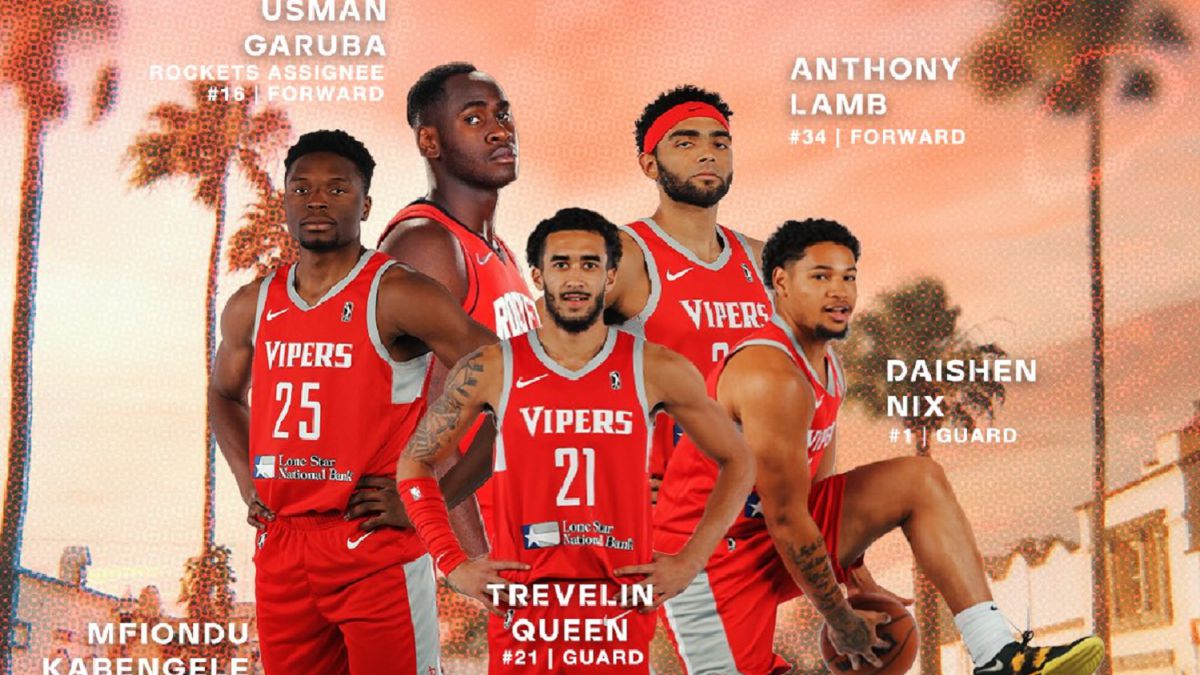 Just before touring the East, a section started with defeat at Madison Square Garden in New York, Houston Rocktes (worst team in NBA: 1-15 with fo

Just before touring the East, a section started with defeat at Madison Square Garden in New York, Houston Rocktes (worst team in NBA: 1-15 with fourteen losses in a row) sent Spaniard Usman Garuba to Rio Grande Valley Vipers, his G League affiliate, a Development League greatly enhanced by the NBA in recent seasons and where they mix young people in need of minutes and adaptation with meritorious who seek opportunities and even established players who pick up pace after long injuries. We just saw him with Serge Ibaka at Agua Caliente Clippers, where he was filmed after his serious back injury.

The G League is not ideal, and even less for players who come from Europe, but it is often a necessary step. Not back, but aside: franchises prefer that their young people accumulate minutes and experience in their shuttle G League before seeing them file nails on the bench, stepping on the track alone in minutes of garbage. Many times this is the case, and in Houston they already warned before the start of the season that this would be the most logical route for Garuba. Simply not all fit: The Rockets chose the first four rounds in the last draft, one of them another European center, the Turkish Asperen Sengun who is accumulating many NBA minutes in a good career start. Garuba, who so far has only played 45, spread over seven games, should take advantage of this step for the Valley Vipers to not rust, pick up pace and mechanisms. Get to this new stage. And be ready for when the call comes above.

The Valley Vipers play in Edinburg, in a pavilion with almost 8,000 seats (there were more than 3,500 fans this time) on the north bank of the Rio Grande, on the border between Texas and Mexico. There, in Hidalgo County, the team’s fourth win without failure (4-0) came (112-104) against the Capitanes of Mexico City, a rival they will face again tomorrow. And Garuba quickly moved to his new situation: he played 33 minutes, only twelve less than in the total of these weeks with the Rockets, and finished with 14 points without failure (6/6 in total shots, 2/2 in triples), 8 rebounds and a block. He also committed five personals and, on the negative side, added 6 turnovers.

The former Real Madrid, now trained by Mahmoud Abdelfattah, has players by his side, he can learn from their cases, which started in a situation like his and now have no place in the NBA: Mfiondu Kabengele, for example, his couple in the inside game, he was 27th in the draft in 2019 and from the Clippers has gone to the G League. Tyler Bey, 36 in 2020, was at Luka Doncic’s Mavericks last season. The best of his team were Anthony Lamb (23 years old) who added 21 points and 7 assists with a 5/8 in triples, and Trevelin Queen (24), not drafted in 2020 who stacked 28 points, 11 rebounds and 7 assists with a 6/7 in triples. Opposite, for example, Alfonso McKinnie was on the Mexico City Captains, a veteran (29 years) who in recent years has played for the Warriors, Cavaliers and Lakers, and that he scored 32 points with 6 rebounds and 5 assists.

Grizzlies disaster and minutes for Aldama

The other Spanish rookie, Santi Aldama, had minutes in the resounding defeat of his Grizzlies, a defensive shipwreck that conceded 138 points (138-95) to the Timberwolves. Those problems behind are sinking Tennessee’s, who are already 8-8 to 7-9 by an improving Wolves, led by their big three: 23 points and 5/6 on 3s from Anthony Edwards, 21 points and 5 rebounds from Towns and 28 + 4 + 5 from D’Angelo Russell. The Wolves are not hanging from the area that will fight for the playoffs places and play in.

Aldama accumulated minutes (12) in the final part of a disaster for his team: 40-23 in the first quarter, 72-43 at halftime, 100-56 in the middle of the third … the Spaniard finished with 2 points, 4 rebounds and 2 assists in a final stretch in which Leandro Bolmaro also appeared for the Wolves. The Argentine base, ex Barcelona, ​​finished with 5 points and 4 rebounds in just over 7 minutes on the court.

Stephen Curry wins NBA Player of the Week
From betting to be able to eat, to the NBA
Utah Jazz – Toronto Raptors, live
NBA 781

Loading...
Newer Post
F1 | The difference between the two Ferraris “is not normal”
Older Post
De La Hoya: “I respect Canelo for seeking to make history”