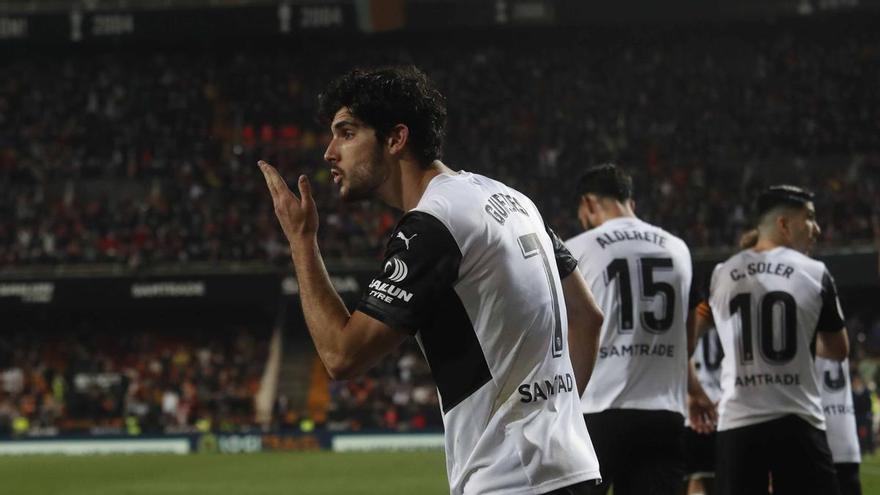 Only with a basic edition of his goals in Val

Only with a basic edition of his goals in Valencia, all beautiful, Gonçalo Guedes would have signed a decent farewell, gimmicky enough to inflate a legacy of brilliant appearance, with no trace of his prolonged periods of absence. Neither the emotional imprint of the centenary year and the Seville Cup have bothered the Portuguese striker, nor the army of communication consultants from the Gestifute emporium, to recreate two contrived paragraphs, or sixty tearful seconds, with which to imply that you knew where you were In the liquid speed of modern football, there is no difference between clubs and championships, between Molineux and Mestalla, centuries-old temples converted into showcases for a business in which rooting is a minor currency. Not even reliable performance over a long period of time is a guarantee to preserve affections. No footballer has been as transcendent in the history of Levante UD as Morales, but his legacy is stained for not having known how to take care of the forms in the goodbye.

The debate, however, should not focus exclusively on whether footballers should recognize each local singularity, in a totally globalized sport and in cities taken over by the franchises. Guedes’ Wolverhampton, with a massive presence of Portuguese players remotely controlled by Mendes, bears little resemblance to the Wolverhampton in which Fernando Gómez Colomer landed 25 years ago, over 30 and in the second division. A football in which the master of San Marcelino finished the matches with kick marks on his back or buttocks and in which his elegant controls were of such exotic rarity that they aroused anthological phrases in the English announcers: «We cannot imagine what good it would be Gómez 10 years ago ». In the jump between championships the contrasts are blurred today and wolves and bats come to seem like the same animal.

To a certain extent, soccer players can be required to champion a root that is sustained above all by the elements that make up the environment. For example, the beautiful farewell of Mertens from Naplesat the sentimental height of his record scorer beating Maradona, is built from a cultural resistance that begins in each of our acts and that ends up forcing an American pizza multinational to close its last store in Italy by succumbing to the hegemony of local producers. In a Valencia that already feeds on simple transfers, in which Peter Lim, after a billion between transfers and sales, hardly sees the players anymore or as speculative assets, claiming that Guedes knows where he is leaving can be even excessive. Faced with such a scenario, surrounded by papier-mâché and increasingly simple and stylized shields, the permanent vindication of memory, militancy and each atom of particularity in local pride will be the first step for youth players and passing stars to learn to say goodbye or to never want to leave.

Tags: Soccer, rooting
MACHALA WILL CONTINUE WITH FOOTBALL IN THE ‘A’: Orense won and was saved from relegation
Newcastle come out of adverse streak in English Football League
The remarkable alliance between Bayern Munich and Misiones: football did it
FOOTBALL 3765