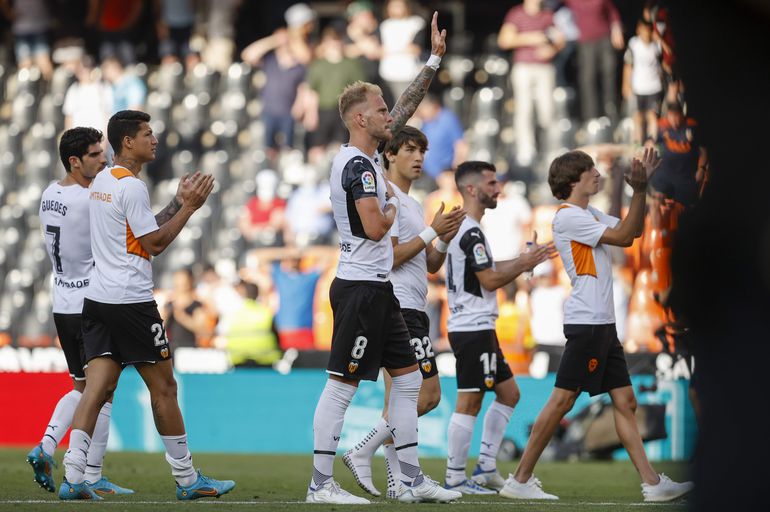 The protests against the property of Valencia and the very low attendance of the public inside the Mestalla were much more protagonists of the afternoon than the game developed by one and the other.

Everything was resolved with a goal from Maxi Gómez midway through the first period and another from Néstor Araujo, an own goal, midway through the second half of a clash in which the locals, without shining, were somewhat better than their rival.

The first half was lightly dominated by Valencia, as Pepe Bordalás’ team had more presence in the opposition field than Celta, although they did not lavish themselves with clear options facing the goal.

Valencianism’s attention was outside the stadium and it didn’t matter what happened inside, despite the fact that the local team performed with more excellence than in previous games.

The 1-0 came in the first dangerous action of the first period, when a deep pass from Carlos Soler reached the feet of Gayà, who crossed for Marcos André to return the ball to the small area. There, the excéltico Maxi Gómez, with his chest, sent the ball to the bottom of the goal.

The dynamic of the match did not change after the Uruguayan attacker’s goal, but there was a clear chance for Eduardo Coudet’s team to equalize.

Five minutes before the break, a shot at the empty goal by Nolito did not go in because the Valencia goalkeeper, Jaume Doménech, came to reject with his feet a ball that was already seen at the bottom of the goal.

This error, in the clearest action of the first period, prevented a draw from being established that would not have been completely unfair after what was seen in the first half in which the local superiority was barely perceptible.

The tone of the game did not change after the break, with a Valencia that pressed a little more against a Celta that was trying to find spaces on the counterattack, but that had not decidedly come out looking for the equalizer, although it was able to obtain it in a tepid header from Galhardo (m.53).

When it seemed that Celta was capable of approaching Doménech’s goal in a way they had never done before, in a counterattack, a center by Maxi Gómez was headed into his own goal by the Mexican Néstor Araujo.

The goal numbed a game in which there was hardly anything at stake and which was conditioned by extra-sports, since with two goals ahead, Valencia tried not to take risks, while Celta lacked the drive to cut differences on the scoreboard. From there to the end, alternatives and few scoring chances.

Incidents: match of the last day of the League played in Mestalla with hardly any public, since a good part of the Valencia fans remained outside the stadium to protest against the management of the club’s largest shareholder, Peter Lim, and the president, Anil Murthy .

Julio Maldonado, ‘Maldini’: “The youngest people have disengaged from football, not from the most important games but from day to day”
Dorados remembers Maradona’s passage through Mexican soccer with emotional video
Milan derby without Italian soccer winner
FOOTBALL 2784

Loading...
Newer Post
Andy Ruiz shows off his millionaire mansion and his luxurious collection of cars
Older Post
4 NBA teams that could tempt Luka Doncic out of the Mavericks