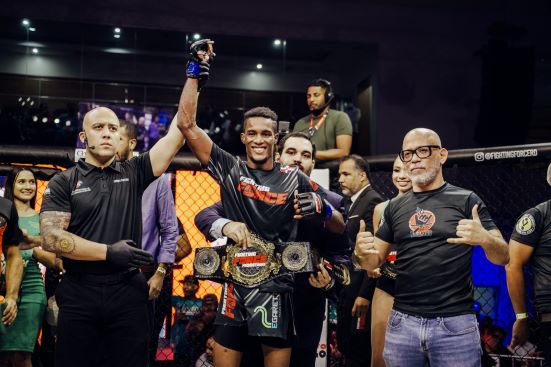 SANTO DOMINGO.- Great emotions were experienced in the Fencing Pavilion of the Olympic Center, where the fighting promoter Fighting Force celebrate

SANTO DOMINGO.- Great emotions were experienced in the Fencing Pavilion of the Olympic Center, where the fighting promoter Fighting Force celebrated its seventh undercard of mixed martial arts (MMA) with 9 professional fights, 3 for national titles.

In the main event, Venezuelan Jhonasky ‘La Maquina’ Sojo retained his lightweight title against Lucas Marte, who fell by TKO in the third round.

For champion Sojo it was his 13th win over the Octagon.

While the American resident in the country Ty ‘La Pollona’ Kalista won the final of the Dominican Insurance Grand Prix, crowning Fighting Force featherweight champion by beating veteran Reynaldo ‘El Mulo’ De Los Santos in the second round of the combat.

Kalista received the award of 100,000 pesos from the Dominican Insurance Company and a state-of-the-art cell phone from Viva Dominicana.

The evening had a great reception from the fans, who filled the pavilion to the capacity allowed by the Italian authorities and enjoyed a great high-level show.

The Dominican Reynaldo ‘Tiki’ Acevedo achieved his victory via technical knockout against the Nicaraguan Benjamin ‘The Beast’ Jirón, who could not continue due to an arm injury.

Likewise, the former national champion Micaías Ureña took the knockout of the night, winning in the first round with two right hands to the face, sending Colombian Jhon Tacha to the canvas.

UFC hero Paddy Pimblett says he would like to fight Man United star Bruno Fernandes, whom he calls ‘overrated’
Dustin Poirier on UFC Fighter Relationships: “Everyone Accepts Each Other”
“CM Punk didn’t do well in the UFC, but he had the courage”
UFC/MMA 473