Vero Boquete, the eternal star that magnifies the Fiore 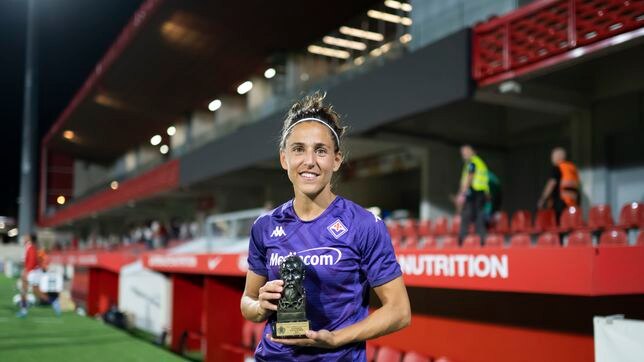 “She is a footballer who enhances the Italian league”, Patrizia Panico, Fiorentina coach, tells AS, when asked by Vero Boquete (Santiago de Compost

“She is a footballer who enhances the Italian league”, Patrizia Panico, Fiorentina coach, tells AS, when asked by Vero Boquete (Santiago de Compostela, 1987) after her great performance in the II Alcalá City Tournament, that her team lost to Atlético (1-0). The Galician directed all the counterattacks of the viola box and was in charge of finishing her most dangerous plays. Her display of technique, dribbling and competitiveness, which ended up awarding her the MVP of the match, only lacked the goal. In addition, she got a standing ovation when she was replaced.

“For us, she is an important player on the pitch because of her technique, bravery, control of the game… she has typical Spanish football, but she is also important off the pitch because of her personality and her winning mentality,” says Panico. Boquete, who arrived at Fiorentina in the winter market of the 2021-22 campaign, has just renewed for one more season. This is the second Italian team in which she plays after her time at Milan, where she came from the American Utah Royals.

China, France, Germany, Sweden, Russia… there is no territory that has resisted a world-class soccer player who has barely played five seasons in the Spanish League and who stopped being international in 2017. “It’s hard to believe that my absence in the call for the European Championship is for a sporting issue, ”he said in an interview with El País after staying out of that call for Jorge Vilda.

Precisely the Spanish coach was able to witness, from the box of the CD Wanda de Alcalá stadium, the great performance of Vero Boquete with the Fiore. The Galician continues to enhance each team in which she plays.

What will happen to the Women’s Soccer League in the second half?
What are the most expensive signings in the history of world football?
UEFA Women’s Champions League facts you need to know
FOOTBALL 3701