Vettel was a child again 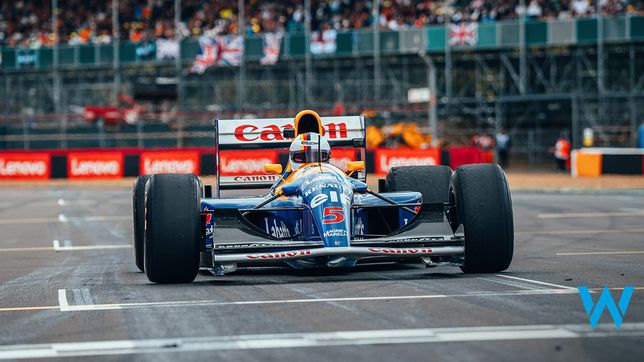 Vettel bought Mansell's famous 'Red 5' in 2020, but didn't get a chance to drive it until recently, in a shakedown before Silvestone. Finally Seba

Vettel bought Mansell’s famous ‘Red 5’ in 2020, but didn’t get a chance to drive it until recently, in a shakedown before Silvestone. Finally Sebastian was able to debut his car on the Thursday before the British GP, doing several laps in the 1992 Williams FW14B. Precisely with this demonstration, 30 years since Mansell won the British GP and his only world title in the ‘Great Circus’. “I felt like a five-year-old again, because the sound, everything, brought me back to 30 years ago,” Vettel said after getting out of the Williams FW14B.

Also, this special staging for ‘Seb’ coincided with his birthday. “I am very proud that we got together and I had the opportunity. It was even on my birthday, which I didn’t realize at the time!” The peculiarity of these spins by Silvestone was the non-carbon fuel that was used to power the propellant of the old Williams. The German requested this formula to use this single-seater again. “Doing it the way we did it with carbon neutral fuels and trying to show emotion can be great, but we can do it in a more responsible way, it was very important to me,” Vettel said.

Vettel has been one of the most critical drivers on the Formula 1 grid when it comes to environmental issues, emphasizing the need for greater sustainability in the future. F1 plans to switch to fully sustainable fuels under the next generation of power units due to be introduced in 2026. Current engines are frozen under regulations until 2025 and can only be changed for reliability reasons.

Following the completion of his display, a number of F1 drivers, including Lewis Hamilton, Mick Schumacher and George Russell, came over to speak to Vettel about their feelings and look at the car, as did F1 boss Stefano Domenicali and Chairman of the FIA, Mohammed Ben Sulayem.

Formula 1: Mercedes, in crisis for the first time in eight years | Toto Wolff acknowledged that the new model has deficits everywhere
this is how Alex Palou won the IndyCar and the hearts of the rest
Great Britain GP F1 2022: Ferrari arrives at Silverstone with improvements to gain speed and return to winning ways
FORMULA 1 3032