Victor Wembanyama: the great countdown begins in the NBA 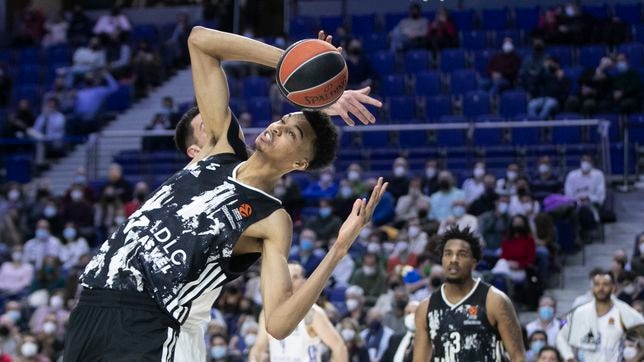 Everybody talks about Chet Holmgren. Everyone wants to see what happens to Chet Holmgren, the unicorn of unicorns, in the NBA. An endless noodle

Victor Wembanyama: the great countdown begins in the NBA

Everybody talks about Chet Holmgren. Everyone wants to see what happens to Chet Holmgren, the unicorn of unicorns, in the NBA. An endless noodle who plays like a point guard, he shoots like a small forward and intimidates like a center with his endless arms. The definitive prototype, the total player for this NBA of liquid positions and game of mobility, perimeter and versatility. But, of course, with a body so light and a weight so low that nobody trusts how he will withstand the collisions of the zones in the professional game. Or the pace of grueling NBA seasons. OKC Thunder gave him the 2 of the draft. His ceiling is 1 special, generational. The floor of him… better not to think about it.

But when we haven’t seen Holmgren yet, an even more unicorn of all unicorns appears. A 2.0 prototype of a first version that has not even been tested. If Holmgren is 2.13, he has a wingspan of 2.31 and weighs only (ay) 88 kilos, Frenchman Victor Wembanyama is 2.19, has a wingspan of 2.34 and weighs 104 kilos. And it will be yes, nothing very (very) strange happens in the coming months, the number 1 of the 2023 Draft. And not just any one. No: this is one of those that makes teams lose their minds, tanking to unseemly levels. With pants removed.

That final against the United States in Riga

Word of Chet Holmgren: “I thought he was tall and had long arms … but he is on another level.” He is 20 years old now, Wembanyama 18. On July 11, 2021, one 19 and the other 17, they had just played the U-19 World Cup final in Riga. The United States narrowly won (83-81) and finished the tournament with gold and undefeated. Holmgren was MVP: 11.9 points, 6.1 rebounds, 3.3 assists, 2.7 blocks and 19.3 average efficiency in just 21.4 minutes per night. He was a tremendous Team USA, anyone who followed this last draft will see that. In addition to Holmgren, there was Jaden Ivey (pick 5). And also Johnny Davis (pick 10) or Patrick Baldwin Jr, chosen by the champion, Golden State Warriors, with number 28.

But it was also a Team USA that passed Cain’s to stop Wembanyama, who finished the final fouled out. A decisive issue: +7 in his minutes on court for France and a final stat to frame: 22 points, 8 rebounds, 8 blocks, 30 PIR. He closed the tournament with silver, the eyes of all American basketball on top and 14 points, 7.4 rebounds, 5.7 blocks and an average rating of 20.1 in 22.5 minutes. And in the Ideal Quintet, of course. With Ivey and Holmgren, called up to the NBA a year before him. And with Nikola Jovic, also chosen in the first round of the last draft (27).

Wembanyama is taller and longer than Holmgren. He is very light but not very light and has a more proportionate constitution that seems more suitable, a priori, to add weight and muscle. He also handles the ball, creates and hits outside shots. He is something less external in his instinct and something more internal by vocation, perhaps. The defense is already there, with a tremendous ability to intimidate. The attack promises in an almost unspeakable way with those powers in the style of Mr. Fantastic, the Marvel hero with the body that never stops stretching. Sam Vecenie, draft expert and young promises of The Athletic, speaks of him as an “impossible” star project: “It’s as if Rudy Gobert could dribble, pass and shoot outside.” Some refine more: the physique of Kristaps Porzingis with the talent of the first Kevin Durant. Glups.

One more year in Europe, in the Euroleague or Eurocup

In addition to some prodigious faculties, Wembanyama has in his favor that he is already a professional. He has already been seen doing things at the EuroLeague level. Certain psychological barriers fell long ago. Maybe not for some fans in the US, but for scouts and experts. When an 18-year-old is able to put up 18 points and 6 rebounds on 4/5 3-point shooting against Armani Milan, there’s something serious going on. In the Euroleague, with ASVEL, he has averaged 6.5 points, 3.8 rebounds and 1.9 blocks. In the regular phase of the French League, he had 9.4 points and 5.8 rebounds. A boy among men.

Born in Le Chesnay, the western suburb of Paris where Nicolas Anelka also grew up, he practiced judo and played soccer while his mother, a professional player, taught him the basics of basketball. He was trained in the Nanterre 92 youth academy, rejecting the offers from ASVEL and a Barcelona that went for him and could only have him as a guest in the 2018 Mini Cup. Two years later, in the 2019 Euroleague U-18 (Adidas NGT) -20, he averaged 15.8 points, 12 rebounds, 2.8 steals and… 6 blocks per game. It was the season of his debut (October 19, 2019) in the Eurocup with only 15 years, 9 months and 25 days. Last year he made the leap to ASVEL and now there is a war in France to put on a jersey for his last year before the NBA: Tony Parker, president of ASVEL, does not want to lose sight of him and Paris Basketball, which bursts into the Eurocup panorama, he wants to score the media blow of having him while the whole planet discounts the days to see him in the NBA.

The problem, once again, will be in the doubts with his physical constitution, with his resistance. Since December 2020 he has suffered a stress injury to the fibula (eight weeks off), a fractured finger (three weeks), a shoulder injury that left him off the court for almost two months of this course and, finally, , a muscle injury that kept him out of the French League playoffs. As with Holmgren, some wonder if he won’t end up being too special for his own self-interest. It is an unknown, of course. The rest is the project of an impossible player, an emerging star with a unique profile. The unicorn of all unicorns. And the No. 1 pick in the 2023 draft if nothing too weird happens. Be careful with tanking, because very little hidden curves come.