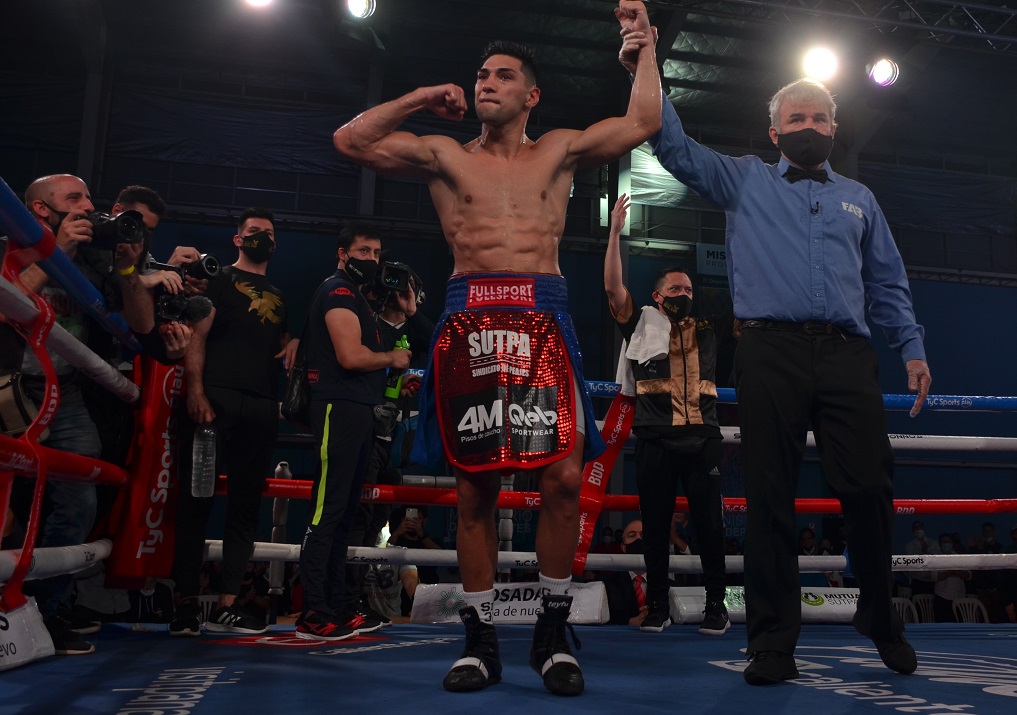 Writes Gustavo Maffini, photos by Marcelo González. A boxing party. This is how the evening called “Making history” could be defined, on Friday n

Writes Gustavo Maffini, photos by Marcelo González. A boxing party. This is how the evening called “Making history” could be defined, on Friday night at the Provincial Center for High Performance Sports (Cepard), in the city of Posadas.

Several reasons spiced the previous one: the return of activity after the pandemic, the presence of an enthusiastic public (No tickets were sold, but – protocols through – boys and staff from gymnasiums and boxing schools from all over the province were allowed to attend), and the premiere, before his people, of the title of Argentine Superwelter Champion for the undefeated posadeño Alejandro “El Cuervo” Silva (28 years old and 13th in the WBA ranking), who exhibited it for the fourth time in the last 12 months, now against the Cordovan Maico “El chacarero” Sommariva, thus reaching the FAB record for defenses in one year.

An additional condiment was constituted by the presence -also on the ring- of his partner, the current WBA Mini Fly World Champion Yésica “La Tuti” Bopp (37), who, although not putting her reign of 12 years, 9 months at stake and two weeks after 23 successful defenses, he was fighting again after two years -and in preparation for an upcoming title fight- in the semi-bottom fight against Santa Fe Juliana Basualdo, but in the bantamweight category and six rounds.

Beyond the main duels, other fights were heating up the ring.

The televised day began with missionary Javier “La cobra” Andino (20-12-1, 11 KO), who in the middleweight category faced Fabio Barros (6-9-1, 4 KO). The first bell rang, and although the posadeño little by little tried to impose his leg speed and better physical condition, the first round ended in a draw. After several intense crosses, and just beginning the second round, a precise one-two followed by a right cross ended with Barros from Buenos Aires on the floor. Knock out and a deserved victory for Javier Andino.

Then it was the turn of his brother, Guillermo “La jeya” Andino (13-6, 6 KO), who after an intense fight defeated Sergio Córdoba (7-11, 3 KO) in the cruiser category. It was a very entertaining fight, in which with each exchange the missionary’s superiority was evidenced. After 4 close rounds in which he had his rival on the ropes on several occasions, Joya Andino won a just victory by unanimous decision of the jury.

Later, and in the super bantamweight division, Agustín Vergara (2-0, 2 KO) faced Luis Pérez (absolute debut), six rounds. I start with the left foot for the debutant Pérez. After a first round in which both contenders made their rival kiss the canvas on one occasion, in the second round Vergara’s technique was stronger, and he knocked down his rival again, this time for good. Knock out 2 minutes into the second round and Ko’s 3rd win in 3 fights for this promising fighter.

In the light category, Neri Muñoz (4-0, 2 KO) carried out an effective demolition job with great skill against the Catamarca-born Walter Saravia (4-4, 1 KO), whom, after sending him to the canvas on several occasions Starting in the 2nd round, he ended up knocking out without mitigating in the third round.

And the great surprise of the night arrived, which overshadowed the return of the champion. In semi-long-distance combat, Yésica “La tuti” Bopp was fighting again after two years and three months, after being inactive due to maternity. Although Wilde’s natural did it in the bantamweight category, three above her natural light fly and against the Santa Fe Juliana “La prophet” Basualdo, who is a natural fly category, the expectation was justified, given the scrolls of the WBA world champion.

While it was a balanced fight, Basualdo (4-2) made his arms reach and strength weigh the most against Bopp (36-2, 16 KOs). Thus, fleeing at all times from the short combat – where Bopp could do more damage – and keeping her at a distance, he made the fight uncomfortable with an aggressive and seamless approach. The light fly champion reacted and went looking for all or nothing in the last rounds but she did not reach. After six intense rounds, and after making probably the best fight of his career, Basualdo was a prophet in a foreign land and stripped Bopp of his undefeated in the country, in a divided but fair ruling.

Thus we come to the icing on the cake. In the background fight, not only the Argentine super welterweight title or the undefeated title of a champion who made his debut against the city where he was born was in dispute. Also at stake were the possibility of witnessing Silva’s FBA record of four defenses in less than a year and, probably, the most interesting thing looking forward: the possibility of a fight in the USA before the end of the year, as Prelude to a world chance, which the Argentine champion (current 13th in the WBA world and on the rise) and his team have been waiting for a long time. Dreams that a very untimely defeat would put on hold, and that the “crow” Silva was not going to allow them to fade.

Thus, once the presentations and the previous show had been made, the fight began. It was a solid performance. Silva (16-0-1, 12 KO) was the favorite and did not disappoint. He dominated Sommariva at all times (9-4, 8 Ko), who although he left everything, did not have enough. It was evident that the rhythm management of the fight was carried out by the champion, who, intelligently alternating attacks to the body and the face, was undermining the integrity of the challenger. After knocking him down in the second round, and winning the third, he continued his patient work in the fourth until he landed a hook to the stomach, knocking him back to the ground, and the referee signaled the end. End of a party (almost) complete in Posadas.

Potosino boxer took gold at the UMBE National Games
Cuban boxer “King Kong” Ortiz WON BY KO on his return to the ring – Complete Swing
How long is the boxing ring?
BOXING 1395