Walking football, the new variant of traditional football that can… 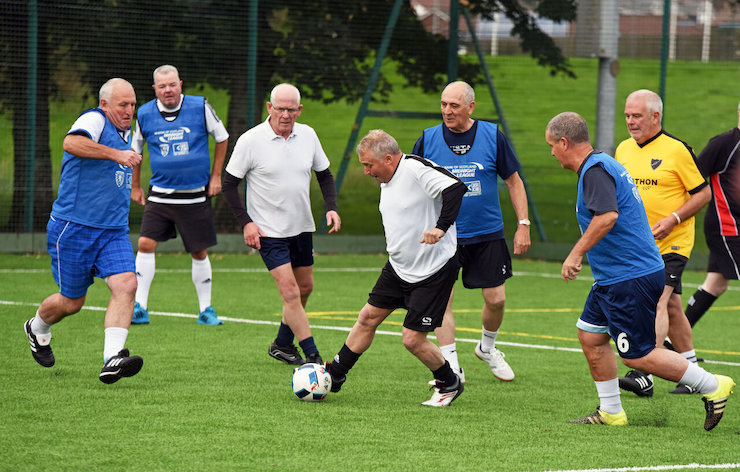 Soccer can also be an inclusive sport. This is the concept that encompasses the new modality designed fundamentally for people over sixty years o

Soccer can also be an inclusive sport. This is the concept that encompasses the new modality designed fundamentally for people over sixty years of age, the so-called walking football. As its name suggests, it is a discipline that is carried out on foot and that focuses above all on enabling the practice of football in people of this age, without any risk to health. That yes, establishing for it an indispensable condition: it is prohibited to run. Running and having physical contact. The University of Aston, belonging to the United Kingdom, has started from this formula to carry out an investigation on the matter and conclude that, indeed, the benefits are verifiable.

Walking football is a variant that allows you to enjoy the appeal of traditional football, but avoiding injuries and integrating players who precisely have reduced mobility. This sport can be played both indoors and outdoors, its operation is based on the rules of futsal and it is also played between 2 teams, each made up of 5 players. Although it had its origin a decade ago in England, in the heart of Chesterfield FC, it was not until 2017 that, thanks to a documentary broadcast by Sky Sport, it became more widely known.

The peculiarity of walking football lies in the slow rhythm with which it is played, so the degree of demand that it maintains at a muscular and articulatory level is minimal, without this preventing the emotion and intensity from remaining unchanged. The profile of the population to which it is addressed is so numerous and so many teams have been organized in so many countries, that even in 2018 the FIWFA was created, an international body in charge of coordinating the matches between the different nations and which is immersed in the preparations for the world championship to be played next May in Manchester. In fact, the first forecasts are already parading by the best sports bets about the possible results of this competition, where the odds give the English as favourites.

Walking football is not only capable of offering a good amount of entertainment, but also brings with it a significant flow of benefits that improve the health of its players. Both blood pressure and respiratory capacity or the cardiovascular system are strengthened with the continued practice of this sport. This is the conclusion reached by the Aston University researcher, Peter Reddy, whose study has focused on a set of 50 people of both sexes who have been monitored while playing walking football.

The sampling took place over a period of three months, during which time different variables and constants of all kinds were measured, such as blood circulation, heart rate, cholesterol, sugar, body stabilization or bone density. , to cite just a few examples. Reddy has verified, among other things, that this unique variant of soccer can be an effective remedy against hypertension and in favor of the individual’s aerobic tone.

The results obtained were very positive, and not only physically, but also psychologically, since a notable increase in serotonin levels could be quantified. It is precisely on this last point that the study allows us to conclude that people who play walking football find a mental gratification that has a direct impact on the state of health, reducing stress and anxiety levels. It is clear that having a birthday is not at odds with playing football.

A sedentary lifestyle is the real enemy to beat for this sport, and inactivity has become one of the main causes of deterioration among people over sixty years of age. It is a frequent behavior that is increasing obesity and diabetic problems in the elderly. Science has shown that leading an active life is the great remedy against aging. Not surprisingly, studies in this regard show that people involved in a more dynamic day-to-day life can reduce the risk of long-term illnesses by up to 25%. There are no excuses not to try walking football.