Westbrook’s departure was not impossible 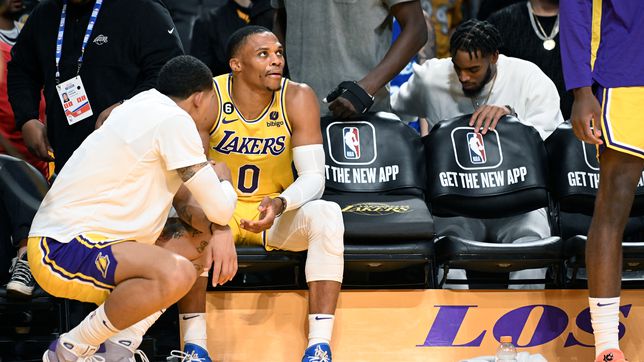 The Los Angeles Lakers have only played three games this season and the results, the image, the sensations they convey are not good at all. The th

Westbrook’s departure was not impossible

The Los Angeles Lakers have only played three games this season and the results, the image, the sensations they convey are not good at all. The three defeats harvested are not the worst, but the lack of a logical idea of ​​​​the game deadly wounded by the very low effectiveness from the perimeter: his 21.2% of three is the worst in the entire NBA, seven percentage points behind the second worst in the league.

But the evils of Los Angeles do not end there, despite having the third best defense (104.1 points received per 100 possessions), they also have the worst attack (97.2 points per 100 possessions) and the worst percentage in the shot (40.7%). And one of the biggest problems in the entire NBA: Russell Westbrook.

The base (33 years old and 1.90 m) is the great protagonist in this start of the course. Because of his bad last year, because of the Lakers attempt to transfer him during the summer and because of his bad start to the season. The best example of him, his performance in the last 4 minutes of the match against the Portland Trail Blazers: he came out with 98-90 and, when he sat back on the bench with a few seconds to go, the Lakers were already down 102-104. The defeat was signed by 104-106.

Westbrook’s contract, which is facing its last season, is the third highest in the League this year: 47 million dollars, only surpassed by the 47.3 of John Wall and the 48 of Stephen Curry, the last MVP of the Finals. An amount that in the Lakers joins that of LeBron James (44.5) and Anthony Davis (37.9), 4th and 14th in the ranking, respectively, and that left little room for maneuver (if not none) to the Angelenos in a summer market in which they tried to get rid of Westbrook. And they had two bullets on the table.

The first, Indiana Pacers, who were willing to trade shooting guard Buddy Hield (29 years old and 1.93 m) and center Myles Turner (26 and 2.11) for the point guard and one round of the 2027 draft and another of 2029 The operation did not go ahead. The Lakers did not see it clear to trade with those two picks and neither did they keep Hield’s contract, which lasted until next season for 18.6 million. In addition, they would have found themselves with the difficult decision of whether or not to negotiate the renewal of Turner, who would have asked for the maximum. Water.

The second came from Utah. The Jazz, according to The Athletic, would have agreed to keep Westbrook in exchange for sending point guard Mike Conley (35 years old and 1.85 m) to California and forwards Rudy Gay (36 years old and 2.03 m) and Bojan Bogdanovic (33 and 2.01). The draft rounds also came into play: the Lakers would keep the first of 2023 from those in Salt Lake City, who would receive the 2027 and 2029 rounds.

The problem of this trade, the duration of the contracts again. Gay ends their relationship in the summer of 2024 after earning 6.2 and 6.5 million dollars just like Conley, although after receiving 22.6 million this year, the next 24.4 are only partially guaranteed (14.3 ) until 48 hours after the 2023 draft when they are fully drafted. The only one to finish in the summer of 2023 is Bogdanovic (19.3).

Inconveniences for the future that would be a blessing for the present with LeBron James still with rhythm (you never know when to end) and Anthony Davis scaring away injuries. All three would be a boon from that hurt perimeter: Conley is averaging 38%; Gay, 45.5% and Bogdanovic is at 50%. Nothing bad. But again, water.