What Yuberjen left his debut as a professional boxer 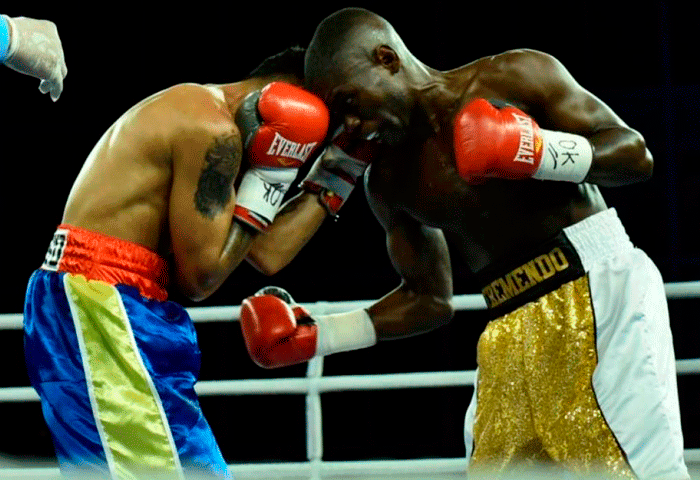 In his debut in professional boxing, Yuberjen Martínez, in the flyweight category (112 pounds), did not come out to destroy as usual in the ring.

In his debut in professional boxing, Yuberjen Martínez, in the flyweight category (112 pounds), did not come out to destroy as usual in the ring.

At the Elías Chegwin Coliseum in Barranquilla, the silver medalist at the Rio-2016 Olympic Games was cautious, conservative, analytical, but just as bold, fast and accurate with his blows, as he does in amateur boxing, to have a successful debut.

With amazing technique and agility, the man from Antioquia knew how to contain and study his rival, Venezuelan Yeison ‘El Chivo’ Hernández, first, to knock him down later in the third round after hitting him with a cross and three hooks with his left hand. Kneeling, Hernandez was unable to continue the fight. Immediately, the public’s applause towards Yuber was immediate.

A year after his painful defeat in the quarterfinals of the Tokyo Olympics, which caused a world debate and hit him morally after the controversial decision of the judges, “Tremendous”, as Martínez is nicknamed, states that this test was already overcome, and that helped him to strengthen himself mentally in the face of great goals.

At 30 years of age, the urabaense confirmed that amateur boxing will remain firm, as his priority is to find revenge in the Paris-2024 Games, and that at the same time he will continue to take safe steps in the professional category because he longs to be world champion. EL COLOMBIANO spoke with this benchmark of national sport.

How did you feel and what difference did you find in your professional boxing debut?

“The truth is I felt good, quite comfortable. At first he was without distance, while he knew the rival. Actually there are many differences, this really is another world compared to amateur boxing. The punch itself changes, the gloves are smaller (they weigh 8 ounces, about 226 grams, and in the amateur they are larger, 10 ounces). The blows are felt more, so you must have a lot of resistance to withstand the impacts, especially since they are no longer three but six rounds”.

Knowing that you just won in Bolivarianos, does it imply that you will not retire from amateur sports for now?

“That’s right, because I aspire to get to Paris-2024. I am being presented with the opportunity to practice both amateur and professional boxing and I don’t want to miss it. It is a double effort, but I think it is worth it and that at 30 years of age I am in a position to achieve great things”.

“I am going to the Olympics to death. What happened in Tokyo was hard, but that’s sport, there are triumphs, other times you lose and injustices are also committed, but you can’t stay in regret, you have to recover as soon as possible because you have to be strong for the constant challenges that they show up.”

How do you recover so quickly in a specialty in which you receive not only physical blows but also mental ones?

“The support of the family is fundamental, especially that of my wife Adriana Marcela López Angulo –she studies Physical Education and Sports–. But I also like what I do, I have dreams, and still have the strength to fight for them, so that allows me to get up quickly in the face of adversity. I know I can go very far.”

In that sense, what objectives do you set?

“There are many, including being an Olympic gold medalist as well as a world champion. The fight is constant and everything is a process, but I consider myself like the phoenix, if I fall, I come back stronger”

year that Yuber won a bronze medal at the Amateur World Cup in Hamburg.

he triumphed at the South American Games in Cochabamba, Bolivia.

Tags: Yuberjen Martinez
Yuberjen lost by decision of the judges in the World Boxing
With triumph in the boxing World Cup Yuber celebrated his birthday
Yuberjen Martínez: Fidel Bassa thinks about robbery in the Olympics
BOXING 4165