When does Marlon ‘Chito’ Vera fight in the UFC? 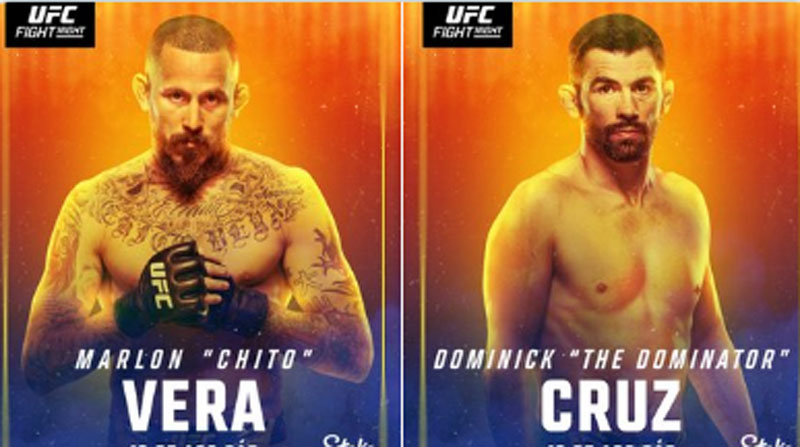 Marlon ‘Chito’ Vera and Dominick Cruz will fight in the UFC on August 13, 2022. Photo: Twitter @UFCEspanol

‘Chito’ Vera will headline the UFC Fight Night Vera vs. Cruz at the Pechanga Arena in San Diego, California, United States. His rival will be the American Dominck Cruz, former UFC champion.

The fight will be the main one on the night of Saturday, August 13, 2022. The fights can be seen live on the Star + platforms, UFC Fight Pass and the ESPN2 channel.

The stellar billboard will start at 6:00 p.m. (Ecuador time). Before the preliminary fights will be held from 15:00.

Marlon ‘Chito’ Vera for the title

Currently, Marlon ‘Chito’ Vera occupies box 5 of the UFC world rankings in that weight class. His rival, former champion and a true legend of this sport, is in box 8.

The Ecuadorian comes to this fight with a professional record of 19 wins, 7 losses and a draw. Cruz, a famed former UFC champion, has 24 wins and 3 losses.

This week is key to getting to fight day strong. These days athletes seek to reach the agreed weight, which in this case is 135 pounds. For this reason, in the world of combat sports, making weight is considered a first fight won.

Ecuadorian Marlon ‘Chito’ Vera received praise and even a new nickname from the UFC »https://t.co/tFJwQQ00uk pic.twitter.com/zjQr9SErbY

Chael Sonnen criticizes the UFC middleweight division for not stepping up enough to challenge Israel Adesanya
“One of the most brutal”: they capture the face of a UFC fighter at the moment of the impact of the kick that knocked him out (VIDEOS)
Will Gilbert Burns test for Chimaev at UFC 273 – Lights of the Century
UFC/MMA 1205

Loading...
Newer Post
Watch out Cinnamon! Oleksandr Usyk and the strong warning that makes the Mexican tremble
Older Post
Who are the F1 drivers? Nicholas Latifi’s B-side: His millionaire father, threats from Lewis Hamilton fans and pressure from across Canada