When football and Palomos fly hand in hand 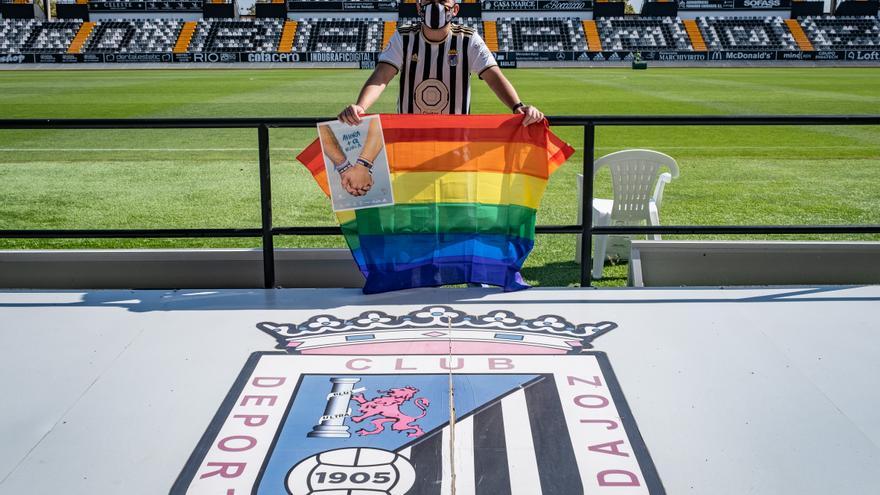 Cristian Píriz, with the rainbow flag at the Nuevo Vivero stadi

When football and Palomos fly hand in hand

Cristian Píriz, with the rainbow flag at the Nuevo Vivero stadium.
S. García

Badajoz is studying for a doctorate in transmitting genuine messages through posters with those who announce their encounters. If in the previous two we already saw first a humorous allusion to a well-known brand of cigars that shares an onomastic with the DUX, a team that he faced on the third day, and in the next home game he used a more than famous television phrase turning into gamers the alternative to being lions to promote the match against the Cultural, in this latest installment, they have chosen a very different route from the previous ones. This past Monday a new publication was published to disseminate to the clash against Racing Santander. However, this time the ingenuity has given way to a strong claim to take advantage of the context of the Los Palomos festival, which is celebrated during these days in the capital of Badajoz.

In said poster you can see two hands intertwined wearing bracelets with the representative colors of the LGTBI and Trans flags along with two more from the Badajoz Sports Club itself. The central message is ‘Now more than ever’, used in this edition of the Los Palomos party and also by the black and white club to launch this latest official product. In addition, within the composition, you can also glimpse the phrase “Love for equality.”

After the posting of this publication on the social networks of Badajoz, some critical comments appeared and somewhat lacking in empathy. Others, however, applauded the black and white entity for the brave initiative. Among them was Cristian Píriz, a lifelong fan of the Vivero team, who left an answer in which he did not hide his enormous satisfaction. This 34-year-old from Badajoz has been away from his city for the last fifteen years, he currently lives and works in Madrid, and has been a Badajoz fan almost since he can remember.

Although he currently cannot go to the stadium much, he does not lose an ounce of attention in what happens to the team of his loves. It’s the club I grew up with. I saw it in the old Nursery and then in the new one », he explains. Among his memories, stand out a promotion to Second Division that he could not celebrate with his father because of chickenpox, his trip to Anduva in that fateful match against Mirandés, or the most recent, the Badajoz-Amorebieta that coincided in date and time with another of his favorite events: Eurovision. Unfortunately for him, they both met a fateful end.

On the present of the club, he points out on the one hand the illusion that makes him see masks from Badajoz, even in Madrid. On the other hand, he cannot hide his concern about the current situation of the club. «It hurts me that we always have to suffer. Nothing ever works out for us. First Tinelli, then the Barrada or Eloy, and now this. We will see what the Justice says, but they always put sticks in our wheels, “he explains.

Returning to the theme chosen on the last poster, Píriz is very happy that the team of his loves has taken this step. I&#8217;ve been asking for it for many years. How much envy Rayo or Leganés gave me, who showed their support for a group that was initially so disparate to football!». All this has caught him in his hometown, where he is enjoying some vacation days that have coincided with Los Palomos before returning to the Madrid capital, where just a few days ago he had a great time with his father watching Atlético-Barça at the Wanda. «We can all fit in this wonderful sport. You love football or you hate it and it was my turn to do it first. Because yes, gays, we also like football and you are not going to be even less gay because you play or go to see it ».

&#8220;I have been considering making an LGTBI section of the club&#8221;, assures Cristian Píriz

On his declared love of football, he admits that although sometimes it is not an environment conducive to diversity, progress is being made. &#8220;The world of football is very difficult, but with these details, little by little you reach a goal,&#8221; he says.

Despite finding somewhat hurtful comments in the Badajoz publication, Píriz assures that he does not take them into account. «If your lifelong club, your home club, your parents&#8217; club, breaks that taboo, we can only congratulate the club and football in general. Because if many are still reluctant to enjoy football, it is because of so many years of exclusion and homophobia that unfortunately still prevails in the beautiful game, &#8220;he adds.

Cristian assures that he is not alone in this duality in which football and diversity converge and that there is a large group of fans. &#8216;The problem is, it&#8217;s not just me. We are many friends who were waiting for this moment. There is a community that likes the team and follows it ». And it is that it seems incomprehensible that this sport seems limited only to people of a certain sexual condition. For this reason, he does not rule out that this community will end up becoming a black and white rock. &#8220;I have been considering making an LGTBI section of the club,&#8221; he says.

While these days the city is tinged with color and tolerance, this man from Badajoz boasts of the muscle that this party can have. «Badajoz has a very strong showcase with Los Palomos and you have to take advantage of it. Not only with football, but also with other activities, because in the end this is beneficial for everyone &#8220;, he concludes.

Loading...
Newer Post
with twelve fights there will be a meeting at the Juventus club. – 10 minutes
Older Post
Formula 1 confirmed the 2022 calendar and it will be the longest in history