Why can’t ‘Chito’ Vera display the Ecuadorian flag in the UFC octagon? 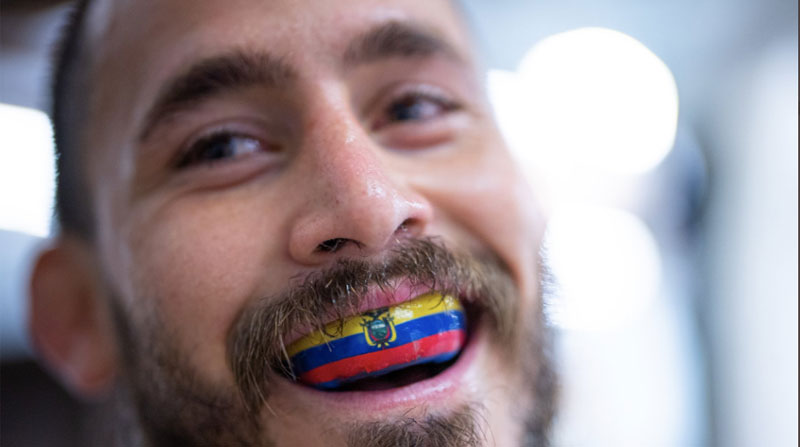 “How nice that we filled that arena with a lot of flags,” Marlon ‘Chito’ Vera posted on Twitter two days after the win over Dominick Cruz at UFC San Diego. He did it in relation to the fact that fighters are now prohibited from going out to their fights with the flags of their countries.

Despite this prohibition, which athletes abide by by order of the UFC’s high command, fans can enter events with their national banners.

Thus, the Ecuadorian flag was seen in the stands of the Pechanga Arena in San Diego, California, waved by dozens of fans who came to cheer on the tricolor in his last fight in the United States.

Coincidentally, Ecuadorian Marlon ‘Chito’ Vera was the main protagonist at the first UFC event where fighters were no longer allowed to display their flags.

It was at UFC Vegas 53, on April 30, 2022, when the Manabi starred in his first main card in the mixed martial arts company.

That historic night, in the UHR APEX of Las Vegasthe manabita took the victory by a unanimous decision of the judges.

Although the UFC has not explained in detail the reasons why the fighters do not climb into the octagon with their flags, these are reasons related to the war between Russia and Ukraine.

“You know why,” Dana White, UFC manager, responded in May to a question about the reasons for the ban.

Before this new regulation, many athletes jumped into the cage with their national colors. ‘Chito’ Vera was one of these.

‘Chito’ was seen with the tricolor flag at weigh-ins, when walking to the octagon and even after his fights. The last time he did it was in November 2021 when he defeated former champion Frankie Edgar.

Marlon ‘Chito’ Vera and the fight for the title

Marlon Vera competes in the bantamweight category (135 pounds), which is one of the most competitive in the UFC. He is in box five and with his recent victory against Dominick Cruz it is likely that he will move up in the ranking although that is subject to other factors.

In the coming weeks other contenders for the crown will also step into the octagon and the future of the Ecuadorian will depend on their results.

His triumph on Saturday, August 13, 2022 was impressive, not only because of the kick he landed to knock out his rival in the fourth round. It was also because Dominck Cruz is considered one of the best fighters in bantamweight history.

That is a plus for the tricolor, which despite the victory is not guaranteed a chance for the title.

“I told him thank you. Many times we ask, but we forget that and we have to thank. I give them good epic performances (to the UFC), they like it. This is a business,” Vera said at the conference at San Diego’s Pechanga Arena.

‘Chito’ has a good relationship with White, whom he met during his time at The Ultimate Fighter Latin America. In that reality show he missed a special fight due to illness, the businessman gave him another chance and invited him to fight in his first official UFC event.

As a last resort, White and his inner circle decide the future fights. Surely Marlon ‘Chito’ Vera is in the crosshairs for future big billboards.

Ecuadorian Marlon ‘Chito’ Vera earned the nickname ‘Destrozador’ in the UFC for the way he ends his rivals in the octagon » https://t.co/UT9OYjtl1N pic.twitter.com/w3CTlfBZxe

Samarbek Sabyrzhan from Kyrgyzstan won the MMA International Fights
Bellator 274: The most devastating and brutal kick in MMA: it breaks five ribs and pierces a lung
Ignacio “Jaula” Bahamondes is a candidate for the UFC knockout of the year – More Sports
UFC/MMA 1206