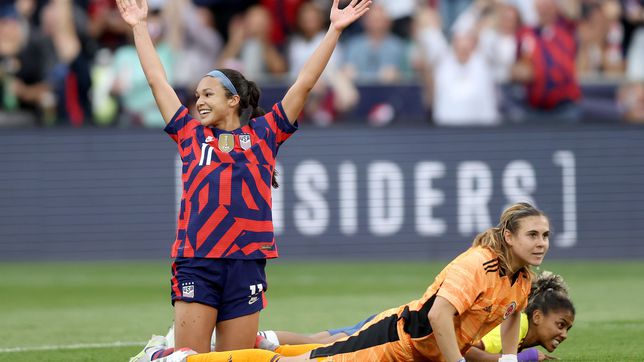 It is not a secret that Conmebol is a stronger zone than Concacaf if we talk about men's soccer. However, in the women's branch the roles are reve

It is not a secret that Conmebol is a stronger zone than Concacaf if we talk about men’s soccer. However, in the women’s branch the roles are reversed. The United States, which in the men’s branch would start as a victim against teams such as Brazil, Argentina, Uruguay and on a par with Peru, Colombia, etc., in the women they always sweep, proof of them are the results they obtain against rivals from Conmebol.

However, they are not only those of Vlatko Andonovski, Mexico recently demonstrated why Concacaf is the strongest zone in the American continent. Those of Mónica Vergara beat their similar team from Peru just 5-1, this prior to making the trip to Monterrey for the Women’s Pre-World Cup.

Before, they beat Argentina 6-1 and Colombia 2-0. We would have to go back to December 2019 to find the last defeat that the Mexicans suffered against a Conmebol team, and it was against Brazil, which according to the FIFA ranking is currently in ninth position.

Mexico Femenil 10 nine games in a row without losing.

In the case of the United States and Canada, the answer is simple as they have one of the best leagues in the world. The NWSL is considered to be the best league in the world by many. The women’s team of the country of the Stars and Stripes has not lost a match against a Conmebol rival since 2014, when they fell to Brazil, but outside of the ‘Verdeamarelha’ they have not had a rival against the South Americans.

The last four friendly matches that the United States played against Conmebol rivals were 2-0 and 3-0 victories against Colombia, as well as 8-0 and 9-0 wins over Paraguay, an overwhelming dominance. Canada hasn’t had much of a hard time against South American rivals. Since 2012, they have only faced Brazil, Chile, Argentina, Colombia and Ecuador, only losing to the Cariocas.

The case of Mexico is a job that has been carried out since the Liga MX Femenil is growing by leaps and bounds and even attracting the attention of figures such as Jenni Hermoso, a recent signing from Pachuca, and Sarah Luebbert, a former player from América. In addition, great players have emerged for the Tri Femenil such as Alicia Cervantes, Katty Martínez, Rebeca Bernal, Alison González among others, as well as the presence of other soccer players abroad: Kenti Robles (Real Madrid), María Sánchez (Houston Dash), Charlyn Corral (Atlético Madrid), etc, although in the case of the latter he returned to Mexico to play for Pachuca.

Costa Rica has also had some positive results against Conmebol rivals such as the one on September 1, 2019 against Argentina and battling Colombia, although the Costa Ricans are still one step below most of the South American powers.

33 years have passed since the 16th Spanish Football Cup
What is the handicap and what does it mean in football betting
Second division soccer returns! Olancho and Juticalpa will repeat the last final and Costly for his first goal with Lone FC
FOOTBALL 3159

Loading...
Newer Post
Canelo continues to challenge Golovkin: “He’s a fucking asshole, I want to finish him before twelve rounds”
Older Post
The present and future of Catalan golf will meet at Golf Terramar