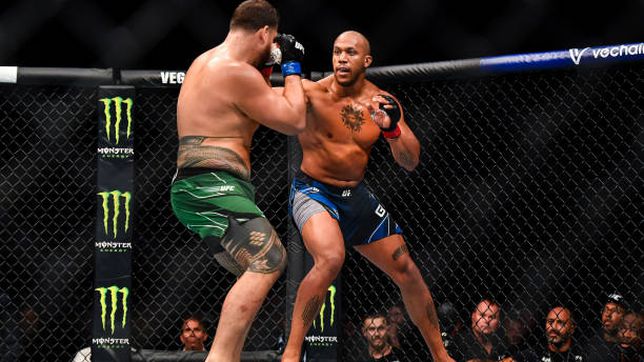 Paris has experienced a spectacle tonight. Frenchman Ciryl Gane, two-time French Muay Thai champion, and Australian Tai Tuivasa have put on a great fight for UFC fans. Gane defeated Tuivasa by technical KO in the third round with a combination of punches that left him struck down unable to get up from the ground.

In the first round, Gane showed his good mobility, calmly, while Tuivasa looked for the short distance and the kick to stop him. The Australian failed to break the distance, taking a high kick from the Frenchman. The second round was complete madness. We could see a score early in the round, but Tuivasa threw a kick to the body and landed several shots that sent the Frenchman to the ground. The KO was close, practically done, but Gane recovered and punished the Australian’s liver area with kicks and knees. They finished the assault exchanging blows, both showing great stamina. In the third round, Gane came out more determined, landing kicks to the face and body of Tuivasa, who eventually went to the ground.

Ciryl Gane had just lost his last fight against Francis Ngannou by unanimous decision, which unified the UFC heavyweight title, while Tai Tuivasa had won by KO in the second round against American Derrick Lewis. There was also a clear difference in weight, the French weighed 247 pounds and the Australian 266 pounds, the agreed limit. Ciryl Gane has managed to proclaim himself champion fighting at home.