With the series tied 2-2, the NBA Final returns to San Francisco 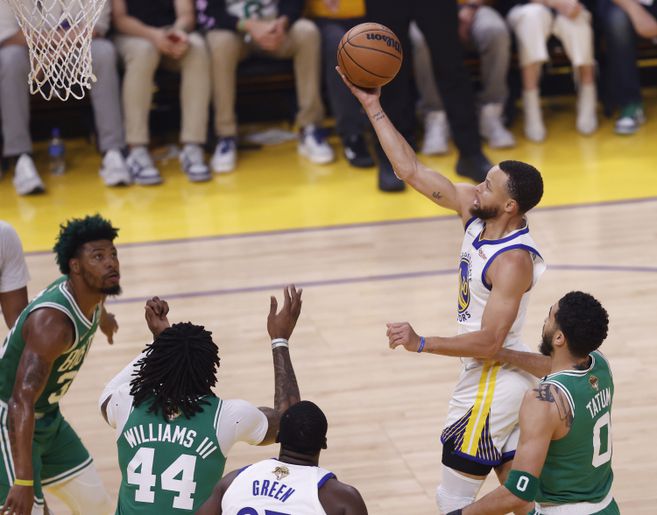 Stephen Curry is being the great star of the NBA final series. Photo: JOHN G. MABANGLOMissed the opportunity to get the NBA Finals back on track on

With the series tied 2-2, the NBA Final returns to San Francisco

Stephen Curry is being the great star of the NBA final series.

Missed the opportunity to get the NBA Finals back on track on their court, the Boston Celtics are forced to respond in their visit to the Golden State Warriors on Monday from the fearsome Stephen Curry, in a fifth game that usually marks the fate of the tie.

The statistics and the trend of these Finals favor Boston’s chances of taking command again on Monday at the Chase Center in San Francisco (California).

With the fighting spirit instilled in them by rookie coach Ime Udoka, all-stars Jayson Tatum and Jaylen Brown and the rest of the Celtics have reacted with a win to each of their seven losses in these playoffs.

Look: Peru or Australia, only one will go to the Qatar 2022 World Cup

The same has happened in the Finals, in which only one point separates both teams on the aggregate score (422-421 in favor of Golden State) but each duel has had a clear winner.

Every time a franchise added a win, it was later beaten by double-digit leads, which gives the Celtics hope to rise again, only this time the pressure and the emotional blow they have to recover from are much greater.

Also: Continuity and investment, keys to the future of Millonarios

On Friday, the Celtics came close to taking a near-final 3-1 lead that would have left them one win away from the title, but a colossal performance from Curry rescued the Warriors.

With Boston ahead going into the final four minutes, Curry emerged to complete one of the best feats of his extraordinary career, totaling 43 points, seven 3-pointers, 10 rebounds and four assists.

“I don’t classify my performances. You just have to win the match,” Curry responded to those who consider it to be his greatest Finals masterpiece.

At 34 years old, the point guard is determined to relaunch the Warriors dynasty that reached five consecutive Finals between 2015 and 2019 and won three rings.

Although he is recognized as the leader of those teams, Curry still has some personal accounts to settle in this series.

The base, the best shooter in history, was never recognized with the MVP (Most Valuable Player) award of the Finals that the Warriors won. Voters relegated him in favor of defensive specialist Andre Iguodala in 2015 and All-Star Kevin Durant in 2017 and 2018.

Curry is averaging 27 points, 6 rebounds and 6 assists in his 32 Finals games but the lack of one of those MVPs in his cabinet left a feeling that he wasn’t at his best on the biggest stage.

If that myth still existed, the point guard is destroying it in this tie in which he has carried the weight of the Warriors alone against the best defense in the league.

Also: Will the five changes in football be maintained? The IFAB made a decision

Without the support of the absent Durant or the best versions of his partners Klay Thompson and Draymond Green, Curry is being able to average against the Celtics a stratospheric 34.3 points, with a 50% shooting success rate, 6.3 triples, 6.3 rebounds and 3.8 assists.

Tatum: “I have to improve”

On the other hand, Jayson Tatum and Jaylen Brown move far from Curry’s numbers, with an average of 22 points each, but they are solidly leading a Celtics eager to reach the 18th ring in their history and first since 2008.

The young pair of forwards is making an impact on both sides of the court although Tatum has not yet offered his best version, stuck before the marking of Andrew Wiggins and in constant tension with the referees.

Tatum’s shooting ERA (33.4%) has plummeted from previous playoffs, in which he shone against superstars like Durant (Nets), Giannis Antetokounmpo (Bucks) and Jimmy Butler (Heat).

Do not miss: The second chances of Fabio Duarte, the champion of the Tour of Colombia

Manager Ime Udoka has publicly asked him to stop focusing on forcing free kicks from his defenders. Waiting for his inspiration to return, the three-time All-Star forward plays a facilitating role with a career-high 7.8 assists in these Finals.

“It’s my fault. I have to be better”, recognized Tatum after the fourth game. “I know I influence the game in other ways, but I have to be more efficient, shoot the ball better, finish better at the rim. I’m looking forward to Monday.”

Tags: NBA Finals, Gsw vs. boston celtics
NBA Stats: Stephen Curry, Game 4 NBA Finals 2022
The most watched games in the history of the NBA Finals
NBA: Game 3, a nightmare for Boston and a fantasy for Golden State | Basketball 123
NBA 2881