Women in charge of football clubs, increasingly normal in Vigo 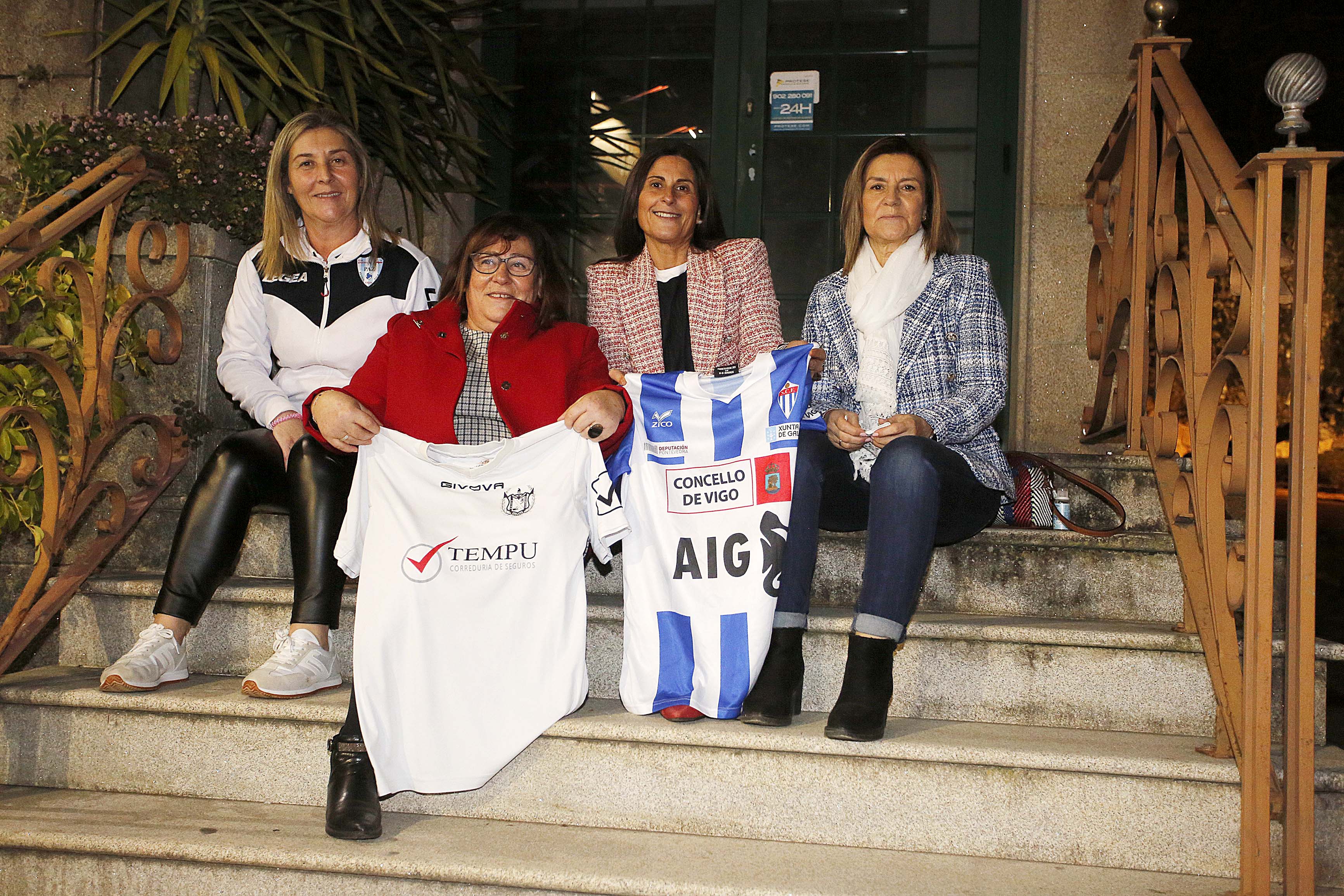 Every day more, although still few in a world of men. Of course, for them, a little less and wi

Every day more, although still few in a world of men. Of course, for them, a little less and with a feminine accent. Currently, a total of 17 football and futsal clubs of the Vigo delegation of the Galician Federation are chaired by women. A circumstance that, as a minority, continues to be striking, especially for the most retrograde minds. “Buah, unha muller not football, you will look at yourself. Non dura dous days ”, is what one of the first women to gain command of a club in Vigo heard. It is Vicky Villaverde, who since 2006 has presided over the Sampayo Rest. “Now there are more of us, but when I started, I think I was the only one. And here I am, fifteen years later, “he recalls each time he describes his arrival in the olive tree.

Her situation was not exclusive because, in Porriño, in a humble club like San Salvador de Budiño, Eva María Domínguez has been in office for more than two decades: “The club was run by a neighbor here, from the parish, but she died. I had my husband in the team as a player and he became a coach and took the club. As I had time to do the procedures and, to help, I entered as president and until today ”. Of course, this help has his love for sports because “when I was little I came to play soccer. At school, which in those days there were no women&#8217;s teams ”, he admits.

They are two examples of historical leaders in humble entities, but in recent years the number of presidents has increased and in less familiar structures and with hundreds of players. A pioneer in the city is Begoña Aldao, who has directed the Sárdoma since the 2017/18 academic year. “The day of becoming president is not forgotten. I remember it perfectly because it was a day of tension and we were there waiting for the scrutiny until I came out the winner ”, says the woman from Vigo. In his case, he came to office in one of those difficult votes to manage, with two competing candidates and made up of well-known people. It is part of the past and, on a day-to-day basis, he found “many surprises, because life is also surprises. The way of watching football does not change, but the way of management does, what is around it and everything that it entails. You see yourself much more involved and it gives you a much deeper knowledge of what an entity is, &#8220;she explains about her years at the helm of the As Relfas club.

Also in this group are María Grazia Paniccia and Marta Costas. The first directs the Porriño Industrial and the second the Pontellas, two neighboring clubs, with an important base and women in charge. Costas, 44, admits that “I rebounded to the presidency. She was the mother of a footballer and the club was left like a headless chicken because the president left in the middle of the season. They asked me to close the management of that year. I closed it and an assembly was called in June. There, they asked me again to please take the lead. So it was. It was not something voluntary, or offered or with what I counted on ”, he describes. This happened in 2016.

A few years later (2019) he acceded to the position of the &#8216;older brother&#8217; of the town María Grazia. “My son plays, and he always did, at Porriño. The option of getting into this madness arose, because it is madness, and we did it. But it&#8217;s nice, &#8220;he argues. And that son is now a first-team footballer.&#8221; But if he gets angry with the coach, I don&#8217;t get involved in anything, I never got involved, &#8220;he describes with some humor. His case is doubly particular because, before leader, she was a fierce soccer fan. &#8220;I have my uncle Antonio Giráldez, who played in the First Division for Deportivo, and a cousin who was in the Madrid quarry. But my love for soccer comes from my father, who he he has adoration for all sports and, especially, for soccer ”.

Because it is necessary to have affection for the ball to spend many hours, have troubles and some joy in the boxes of the modest teams. Even if the presidency is of a Neighborhood and Cultural Association, as it happens with Candeán and María del Carmen Martínez. “I carry soccer, music, choirs… Everything. I fell for the sport and the rest, everything. I have a sports director, who is the one who is there on a day-to-day basis, but I go to all home games and, when there is something special, such as a rivalry match or the Vigo Cup final, we already play it ”, relates. And, in her case, she assures that she did not encounter many difficulties as a woman in the presidency because &#8220;before me, there was already another and everyone, including children, see it as something natural.&#8221;

A favorable view although, normally, is not the norm. “In the towns, especially in the interior of the province, they still treat you like“ what are you going to know about this? We are from a parish, but we belong to a more developed municipality. I think it corresponds more to men anchored in the past theorems of soccer. And it is not a thing of age ranges, it is sad, but it happens like that. It happens with men who are not that old and, to this day, it seems incredible to me, ”says Marta Costas. A situation that worries you. In the case of Begoña Aldao, she comments that “every day it is more normal to see a female president, but it is still something that surprises. We are in almost all areas, but football is very masculine and it is something that costs &#8220;.

A situation that extends from the big field to the small one of futsal. In this modality, in the Vigo delegation there are four presidents and one of them is Begoña Fernández, who directs the A Paz Sports Club, within the city. “It&#8217;s a lot of trouble. A nice experience, but with a lot of work. Combining work, family and sports life is difficult. The first years were the hardest. Now everything comes a little more rolled because I did not know anything about futsal and you have to train a little. You must know the world in which you move and I had no contact with it. I came to him for my children ”, he admits. In her case, the fans came as a spectator mother and described that “there are very few women in managerial positions. One in the Pecheches and some other in the Arealonga, but little else. It becomes strange because it continues to be a man&#8217;s world ”, he reiterates.

Some for pure hobby, others for reasons of destiny and almost all for having a family connection with their club. The presidents in the world of soccer arrived and, it seems, that to stay in those positions of a lot of work and hours of private life left in the fields.

To preside over a football club of modest categories is far from being a position with the &#8216;glamor&#8217; of the boxes that can be seen in the First or Second Division. Normally, you have to manage a few euros, pitch in in many facets and know how to create a team of collaborators to help out for the love of a shirt. This is the case of Vicky Villaverde who manages to keep the Sampayo Rest, despite playing on an ancient dirt pitch. &#8220;Along with the Colegio Hogar, the only one left in Vigo,&#8221; he describes. A situation that damages the entity because &#8220;the lower categories were lost, the children do not want to play on land.&#8221; For this reason, in her case, she acknowledges that since 2006, “many times I regretted taking the step to be president. But if I go, this disappears and I don&#8217;t want to be remembered as the president of the disappearance. I am a neighbor of Sampayo and it would hurt me a lot ”, he explains.

A love that Eva Domínguez also shares, who leads the San Salvador de Budiño with her husband and coach, Manuel Rodríguez. For this reason, from the band, &#8220;many times I want to fire him,&#8221; he says with a laugh. But he maintains it “because football lives a lot. He gets up at eight in the morning to paint a dirt field on Sunday, &#8220;he says.

These are some of the daily situations that occur in teams and other decisions have a deeper depth, of pure sports philosophy. This is the case of the president of Porriño Industrial, María Grazia Paniccia, when she expresses that “we want to nurture the first team of grassroots players. If we are working for many years with people in the club, I think they should have the opportunity to be in the first team after finishing the youth category. Or, at least, have the option to try and have the coach make the decision. &#8221; A vision similar to that of her neighbor in Pontellas, Marta Costas. The first team is this year in Preferential, after falling from Third, but describes that the descent “I had already assumed. I like to win, I don&#8217;t like to lose even the marbles, but I don&#8217;t lose my mind. The covid did a lot of damage to us at the base of the club and I want to go back to where I was in the lower categories. That worries me much more than if A goes up or down from Preferred to Third ”.

Thoughts that are already a philosophy and club policy. Capturing them on a day-to-day basis is the complicated thing between the current difficulties, marked by the covid, and the historical ones for small clubs, almost always financing. Although “there are often surprises. One day you walk into the soccer field thinking one thing and then the opposite happens. But not everything is unexpected, ”says María Gracia, the first president of Porriño.

Loading...
Newer Post
Boxing: The heavyweight Champions in 2022
Older Post
NBA 2022 Chicago Bulls vs Dallas Mavericks: Luka Doncic shines with a triple-double and leads the Mavericks victory against the Bulls