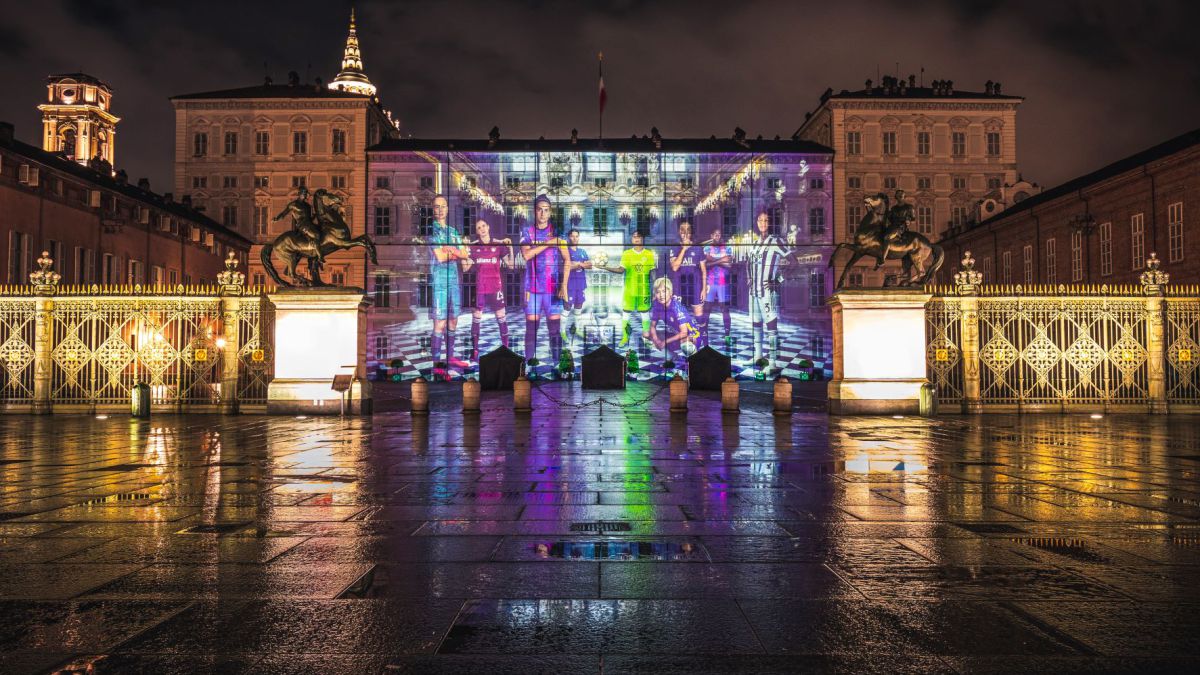 UEFA has turned competition into an art form by commissioning a team of accomplished female expressionists turning the highlights of this season’s Champions League into a stellar display in more ways than one. The Queens of Football campaign was created to star in this renewed historic year in women’s football and icons will star in this season’s tournament. Among them, the Spanish Alexia Putellas.

Before the first day, an image inspired by the Renaissance featuring some of the most important figures in European football was projected in the extraordinary Palace of Turin to celebrate the first match of the new group stage format and highlight Turin (Italy) as the venue for the grand final. Among the players represented as part of the launch are the Baarcelonistas Alexia Putellas and Asisat Oshoala, Christiane Endler (Lyon), Jordyn Huitema (Paris-Saint Germain), Shanice van de Sanden (Wolfsburg), Sarah Zadrazil (Bayern Munich), Sara Gama (Juventus), Sam Kerr and Ji So-Yun (Chelsea).

After quadrupling the tournament prize money to € 24 million this season and announcing to DAZN and YouTube As the Champions League’s first global broadcast partner earlier this year, UEFA aims to demonstrate its continued commitment to increasing the prestige and the profile of their main club competition showing their stars through the Queens of Football campaign.

The Queens of Football campaign, centered around the symbolic looped emblem of the tournament star, which resembles a royal crown, elevates the tournament’s increasingly competitive nature and prestige as the best of the best in women’s club football compete to be crowned the best team in Europe.

Chelsea’s Sam Kerr, who played in last season’s final, explained: “Reaching the final of the biggest club tournament in Europe was a special moment for the team and me. Although we were disappointed to finish as runners-up, it has us given even more momentum and determination to ensure we take the title home this season. ” “It is always a real test to play against so many talented players from all over Europe and experience their different styles of play on the field, and it is really exciting that we can welcome fans from all over the world to be a part of our journey as part. of the new UEFA agreement. with DAZN “, he sentenced.

Jordyn Huitema of Paris Saint-Germain commented: “It is a privilege to play in the Champions League and in the company of such talented players. We were so close to reaching the final last season, and this has made us even more determined to take that crucial stage further. This season’s new tournament format is a huge step forward for women’s football and gives us the opportunity to play against teams of such high caliber, which will only make us stronger. It’s really encouraging that first-time fans around the world, especially in Canada, can enjoy our game with UEFA’s new deal with DAZN. “

Bayern Munich’s Sarah Zadrazil added: “It is always an honor to play in the UEFA Women’s Champions League, especially last season as our campaign took us all the way to the semi-finals. This season we will do our best to reach the final, and although we appreciate that it will not be an easy task with the introduction of the new group stage, we are more determined than ever. As a team, we can’t wait to see even more fans involved globally during the season with UEFA’s new broadcasting deal with DAZN. We are ready to show the world all that the UWCL has to offer ”.

Throughout the season, four artists will each have a unique perspective on the action that will unfold, with players at the forefront of their inspiration. Spanning the media of fashion design, digital animation and 3D sculpture, UEFA has assembled a galvanized creative team to bring key moments from the Women’s Champions League to life as part of the Creator’s Project.

His work will be unveiled at an exclusive art exhibition before the final in Turin, a city founded on a rich artistic, cultural and architectural history.