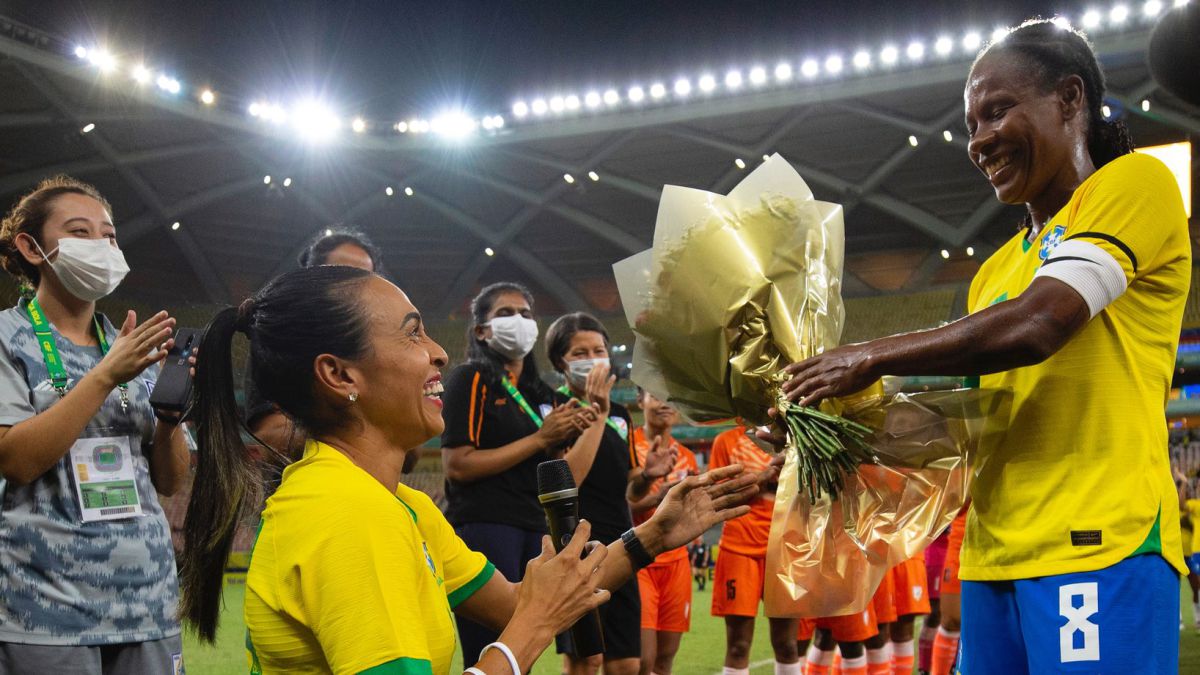 The Brazilian team said goodbye to one of its legends: Formiga. The 43-year-old midfielder played her last game for Canarinha after becoming the

The Brazilian team said goodbye to one of its legends: Formiga. The 43-year-old midfielder played her last game for Canarinha after becoming the footballer, man or woman, to play more World Cups and more Olympic Games, with seven editions of each disputed. Manaus was the scene of the farewell to the mythical footballer who has passed through teams such as New Jersey, Chicago Red, Malmoe, PSG or Sao Paulo, where she currently plays. The midfielder came out in the final minutes of the friendly against India to say goodbye on the pitch after a week full of tributes.

The Manaus stadium was dressed up with photos of the soccer player on its exteriors that surprised Formiga when he arrives at his last training session with his national team. Formiga has spent 25 years defending the Brazilian shirt and has been one of the promoters of women’s football in Brazil, where he began to play despite not having much support. However, he fought like an ‘ant’ until he achieved his goal. A nickname that he carries with pride, for his tireless work in midfield.

“It is wonderful to be able to share this moment with you, especially here in Manaus, which is a place that really embraces women’s football”, explained before the meeting. And he added: “I was reflecting a bit and I think that maybe I can help not only in the third line, let’s put it like this, which is the coach’s demarcation, but also outside, as the director of a club or even the Federation.”

Marta, Pelé or Rapinoe said goodbye to her

The social networks of the Brazilian National Team were a tribute to the player. From the coach, Pia Sudhage to players like Sinclair, Carli Lloyd, Rapinoe or Cristane, players from the Men’s National Team like Tiago Silva, Cafu, Marquinhos or Alisson, his partner and myth Marta or the King of football, Pelé, They left messages for the player. “The story speaks for itself. It is an example of perseverance and dedication. One of the most loved people in the world,” said Marta

“Formiga, my dear, I want to congratulate you. Congratulations, with all my heart. Congratulations and long live our Brazil. Long live, Formiga! ”, Said, for his part, Pelé in his message.

Ultras: The French League puts football to shame
Smile football! Christian Eriksen returns to training after his heart attack: the curious place where he practices – Diez
Digitization, financing and aid: the keys to the development of non-professional football
FOOTBALL 730