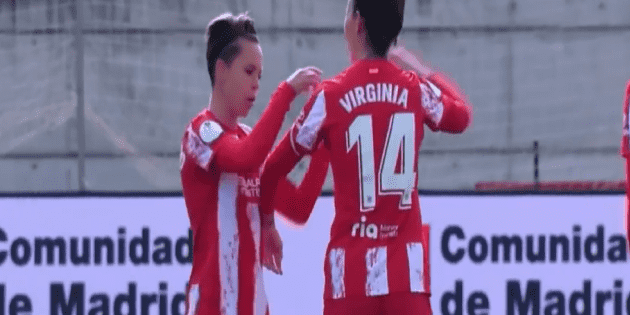 This weekend at the final of the Spain Supercup female something happened to applaud during the match between Barcelona against Atletico Madrid, when one of the players of the “colchonero” box returned to the courts after being absent after almost two years.

Player Virginia Torrecilla She had to undergo surgery in 2020 after detecting a tumor in her head, so the return to the field of play was something important for her.

The game was in the 85th minute, when coach Óscar Fernández called Virginia to enter the field, it was then that the spectators, soccer players and coaching staff of both teams cheered the player after entering.

That was not all, her teammate took off her captain’s armband and put it on Virginia making a grand gesture for her return to the courts.

More than 680 days later, VIRGINIA TORRECILLA IS BACK.

In exchange for his greatest support in these months, Mesi and Amanda give him the captain’s bracelet. pic.twitter.com/9Cf97ur640


Soccer players from the rival team also celebrated the rival’s return and threw the player into the air as a celebration.

The soccer player, Virginia Torrecilla spoke about her return to soccer and says she feels “very content and happy” and that for the club “it is a very important victory”.

“I have been moved just thinking about it. I am very happy, very happy, this is a prize for me regardless of the result. That I return after so long for the club is a very important victory. After two years of training, of chemo, radio, disease, I’m here and it’s the most important thing of all,” said the player.

Despite the fact that the match ended 7-0 in favor of Barcelona, ​​Atlético de Madrid and the rival team gave this huge gesture to the player, leaving a great example that rivalry is left aside.

Tags: women's soccer, Spanish football, Cancer
‘You don’t know anything about football’
His future would be in French football, they assure from Spain
He banned soccer players from getting tattoos
FOOTBALL 2345

Loading...
Newer Post
After F1, now Rappi points to football with a sponsorship of the Colombian National Team
Older Post
MMA published Report on the State of the Environment 2021