World Boxing Championship in Belgrade: Between fists, keys and strings 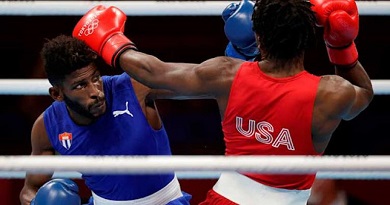 Read article: 4 Cuban boxing will go to the next Belgrade World Cup (October 26-November 6) with a lot to try in their saddlebags. The one of

Cuban boxing will go to the next Belgrade World Cup (October 26-November 6) with a lot to try in their saddlebags. The one of the Serbian capital, only for the masculine sex will have several novelties that will go from the increase to 13 divisions promulgated after the Olympic Games of Tokyo by AIBA.

Until the cash payment of 200,000 dollars to the medalists, at the rate of 100,000 for the monarchs; 50,000 for the silver medalists, and 25,000 for each of the bronzes. Logically, it will be necessary to see if in the midst of so many maneuvers, hostility and blockade, our boxers will be able to collect their loot.

Another important element is that this world contest will mark the beginning of the new Olympic cycle, and in the case of our army it will be very gratifying to see men like Osvel Caballero (57 kg), Kevin Brown (67) and Yoenlis again compete at the highest level. Feliciano (75); the first two for their proximity and bloody rivalry in the internal sphere with the established Lázaro Álvarez (60) and Roniel Iglesias (71), and projecting possibilities of trump cards facing Paris 2024.

In the case of Feliciano, because after not having given him his score to access the Japanese capital by ranking, he must have all that thirst for triumph contained, spiced up with the fact that, after Arlen López’s rise to 81 kg, that’s a weight category in which no other push figures are currently in sight.
Precisely Arlen will be one of those absent by the Antillean legion, due to personal problems that kept him away from the optimal sporting form to face the World Cup, according to what the technical group wielded to the sports weekly Jit.

The other absences are associated with a last-minute hook brought about by a voracious enemy, the Covid-19 pandemic that still continues to wreak havoc. We are talking about Yosbany Veitía (54 kg), Dainier Peró (+92 kg), Damián Arce (51 kg) and Billy Rodríguez (48 kg), who were positive in the medical examination applied to the entire squad.

In the case of Veitía and Peró, both fifth in the lands of the Rising Sun, two noticeable losses, since the Spaniard, in addition to qualifying in Hamburg 2017, exhibits the bronze of Almaty 2013 in 49 kg, and the subtitle of Doha 2015 in the 52. While Peró, although he does not treasure any supreme performance in world competitions, he has accumulated rigorous competitive experiences, mainly in the last cycle.

One detail, are the super complete, a division in which Cuba has not been able to win a medal since the distant scepter of Odlanier Solís in Mianyang, China 2005, understand seven editions without climbing to the awards podium and three Olympic cycles, which is translates into 13 years.

That said, Olympic monarchs Roniel Iglesias (71 kg), Julio César La Cruz (92 kg) and Andy Cruz (63 kg) will travel to Serbia; along with Álvarez (60 kg), in the role of standard bearers of a squad that rounds up, in addition to the aforementioned Caballero, Brown and Feliciano, Herich Ruiz (86 kg), who will set sail this Sunday for Uzbekistan to complete an intensive training base This is very important, especially for those with less road, which can be tempered with the Asian and European fighting style, present in other schools.

If it is about keys

I have always heard that the state of grace must be taken advantage of. Well, that is precisely what Roniel, Julio César and Andy will try. With a practically imperceptible increase in weight, the first two, among the oldest in the navy at 33 and 32 years, respectively, will try to sound out presumably new rivals and show that they still need to be counted on.

They are two of our most successful fighters at the highest level, too.

A look at the two World Cup versions of the preceding cycle shows that in Hamburg 2017 the cast of the Greater Antilles dominated with force (5-2-0), and among the monarchs of that time were Andy and La Cruz, while Roniel was silver . Returning from two years in Yekaterinburg, the performance was not entirely commendable.

With one medal of each color, the honors went to Andy, Álvarez, and La Cruz, gold, silver and bronze, respectively.

Judging by the stability and boxing quality of that quartet, it must once again be in the battle for the metals; to which I would add Brown and Caballero from a personal perspective.

Because of their competitive experience, being forged to the rigor of pitched duels with Roniel and Lázaro here, and because of the fact of patenting previous quality demonstrations when they have been given the opportunity to contest.

Of our other representatives, the most seasoned is Peró, but if we are guided by the aforementioned drought of lauros, and the qualitative endorsement of the best exponents of that division today, it would collide with some of the same Olympic stones.

Feliciano, and Ruiz will have to be followed closely with the benefit of the doubt that historically, by dint of technique and accurate fists, the debutants or members of the Cuban squads have won, especially when the work of the helmsman Rolando Acebal and the rest of his collective has been positive since he took over the reins after Beijing 2008.

Regarding the squad and a possible performance, Acebal remarked to colleague Guillermo Rodríguez that

… “The team made up changed, we are going with only 8 figures. This is not positive at all because we lose the possibility of training these athletes. With them we intend to improve the performance of the last World Cup “…

Meanwhile, regarding the training base and the way in which the equipment could arrive, he patented the following:

… “It is a short base but it is very important. We have to look for a better work-rest ratio and there we will have this possibility, in addition to having rivals.

Since we started training, the time has not been enough, because we have had situations with the pandemic. These are boxers with great mastery and I think that with that they can supplement the physical issue “…

That is the panorama before the initial gong. Literally an opening bell, in order to project the work towards the appointment under the five rings of the City of Light.

St. Louis present in boxing home run
There will be a boxing function on the charro canvas
Istanbul Organizes Women’s Boxing World Cups | Other Sports 123
BOXING 460