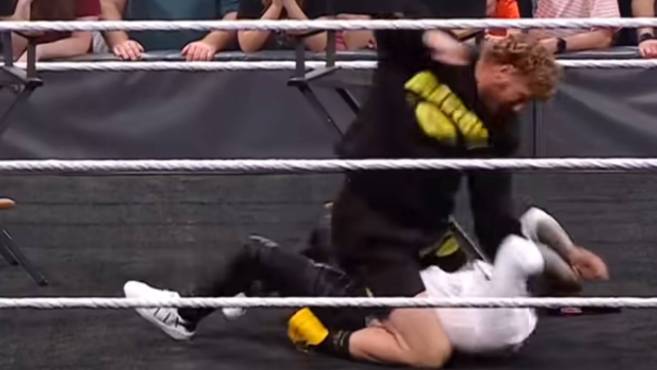 logan paulthe famous youtuber turned boxer, was introduced as partner of The Miz (Michael Gregory Mizanin) to challenge Mistery King and his son Do

logan paulthe famous youtuber turned boxer, was introduced as partner of The Miz (Michael Gregory Mizanin) to challenge Mistery King and his son Dominick facing the WrestleMania 38 of WWE that will be played on April 2 and 3, 2022.

“Did this asshole deserve a WWE contract or did his dad get him one?” he said. The Miz in the ring challenging Rey Mysterio and his son Dominick.

The Miz and Logan Paul, star couple for WWE’s WrestleMania 38

In the middle of a verbal scuffle The Miz presented who would be his partner to fight against the Mysterio clan… Logan Paul!

“This is what I propose to you. My new tag team partner and I against the Mysterios at WrestleMania. Let me introduce my special guest, my new partner. Ladies and gentlemen, please stand up, to receive Logan Paul “, Thus presented ‘The Miz’ to Logan Paul.

The Mysterios accepted the duel against Logan Paul and The Miz, what they did not count on is that the couple of the boxer and the fighter treacherously attacked them from behind.

The Miz hit Dominick Mysterio from behind, a moment that Logan Paul took advantage of to treacherously attack Rey Mysterio.

Logan Paul and The Miz left Rey Mysterio and Dominick Mysterio lying on the canvas, celebrating their treacherous triumph before a crazed crowd.

Wrestlemania 2022: When and where is it?

WrestleMania 38 will take place on Sunday, April 3, 2022 at AT&T Stadium in Arlington Texas.

Tags: sports Center, Another sports, boxing
The Renault Llucmajor enjoys the most supportive blows
UFC 2021 Mexico: How much money does Brandon Moreno earn fighting in the UFC?
Meaztegi Golf to host the Bizkaia PGAe Open
BOXING 4911