Yamaha hallucinates with the performance of Quartararo 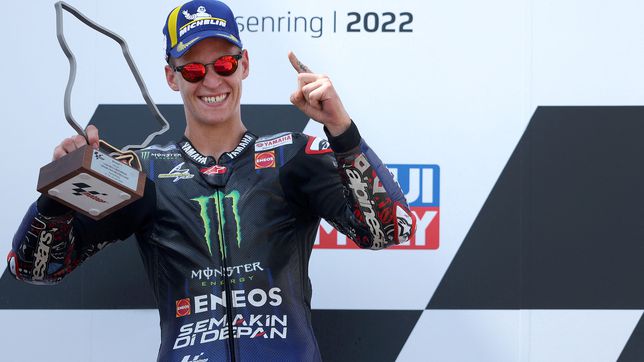 Even in Yamaha they are amazed with the performance that Fabio Quartararo is offering on the back of the Yamaha. In Germany he won again for the t

Even in Yamaha they are amazed with the performance that Fabio Quartararo is offering on the back of the Yamaha. In Germany he won again for the third time so far this year and he did it by passing the roller, while the second best Yamaha at the finish line was that of Morbidelli, thirteenth 29 seconds from the head in a 30-lap race.

When asking Julián Simón, coach of the official team riders, he goes even deeper into what he told AS after the Frenchman’s victory in Montmeló: “This Quartararo is better than last year’s because the competition is better. Look at Aleix’s level with the Aprilia and the Ducati. It’s been a difficult year for Fabio because the bike is the same as last year, since Yamaha hasn’t made any big changes either. What he is doing is very commendable. Let’s remember that he started the championship badly, suffering in Qatar, and he is making the most of it, showing that he has a total champion’s mentality”.

The Villacañas rider from Toledo knew that his rider could win in Germany and become the successor to Marc Márquez on a circuit where he had been winning MotoGP continuously since 2013, but not over the roller: “The form is more surprising than the victory itself . It was clear to me that I could win, because my pace was spectacular in all sectors. The only concern is if he would hold the rear tire, because he was wearing the medium when the others were wearing the hard one, but he has managed it very well”.

Another detail that ‘Julito’ stands out about the champion is that “he is very psyched up and is just for and for the bike. He doesn’t change too many things and focuses on maximizing what he has. He doesn’t get nervous about moving the bike if something isn’t going well, but he analyzes it very well. And then he has a great talent that goes along with the great stability that he has right now”.

Italian GP MotoGP 2022: Max Biaggi, MotoGP Legend: “I don’t want regrets”
The final results of the MotoGP pre-season tests
MotoGP | Quartararo: “I am my biggest rival in the fight for the title”
MOTOGP 639