Young people from the Risaralda Boxing League were attacked with machetes 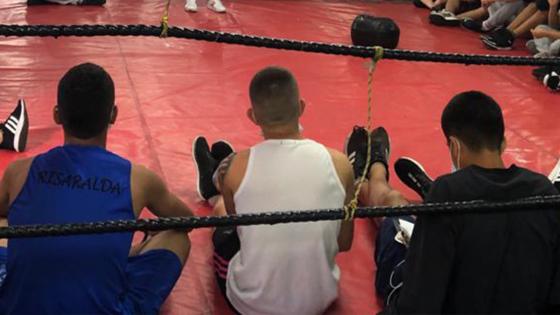 Not for violence by suspected soccer fans. After what happened at the Nemesio Camacho El Campín Stadium last Tuesday, August 3 during the match be

Not for violence by suspected soccer fans. After what happened at the Nemesio Camacho El Campín Stadium last Tuesday, August 3 during the match between Santa Fe and Atlético Nacional, alleged fans of the Cardenal team attacked athletes from the Risaralda Boxing League with machetes for wearing green and white garments.

The incident would have occurred the same night that the confrontation was recorded inside the stadium in Bogotá.

According to the information provided by the Risaralda Boxing League, young people between the ages of 12 and 17 were assaulted by alleged fans of Santa Fe when they arrived at the hotel where they were gathering in the capital.

In addition to stealing the belongings of athletes, The subjects attacked the youths with machetes, resulting in several injuries.

Cristian Henao, president of the Risaralda Boxing League, said that the attackers possibly confused the delegation with Atlético Nacional fans because of the colors they wore, since the uniforms are green and white.

Some of the Risaralda athletes were injured in various parts of the body. One of them had to be transferred to a health center where they did several sutures on his head and one of his arms.

According to Henao, several of the young boxers will not be able to compete due to injuries. According to the president of the Risaralda Boxing League, the athletes They had been preparing for this competition for over two years.

Some of the photographs taken by the members of the league were published on social networks. In them it is possible to observe the injuries suffered by some of the minors.

In fact, the alleged fans of the cardinal team would have stolen clothing and sports equipment essential for young people to develop their activities.

Through social networks Internet users rejected this fact. Colombians made several publications expressing their outrage at the attack suffered by the young boxers of Risaralda.

“The photographs of what Santa Fe fans did to the children of the Risaralda Boxing League last night have me crying. They are very dangerous criminals. They attacked them with machetes because they thought that because they had a green uniform and a paisa accent they were from the National&#8220;wrote one Twitter user.